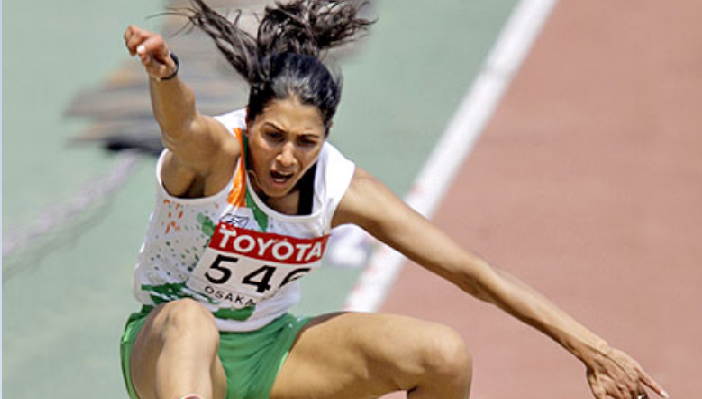 India’s sole medal winner in the IAAF World Championship, Anju Bobby George, is impressed with the talent on display at the ongoing Khelo India School Games. The bronze medal winner of the Paris meet, which was subsequently upgraded to silver after Russian silver medallist Tatyana Kotova failed a dope reanalysis test, also feels that the first Khelo India School Games is an ideal platform for spotting and grooming talent.

“It’s a great platform for the youth of our country. This is first time they are getting this kind of support from the government. Actually it’s a huge support,” said Anju after presenting medals to the winners of athletics event at the Jawaharlal Nehru Stadium.

The champion long jumper is equally clear about the career path she would like her children to follow. “I definitely would want my kids to become athletes. Though, we haven’t decided on any particular sport, I am sure they will end up making a career in sports. I think they have inherited sports in their genes from Bobby (husband) and me,” she said.

With both parents being heavily invested into sports, and having competed at the highest level, they have a natural ability to spot talent at a young age. “Andrea has shown early signs. She’s very quick in her reflexes; we can already see a spark in her,” said Anju. She also believes that an early grounding in athletics will equip her children for any sport. “Athletics is the mother of all sports. It helps to develop flexibility and muscle strength, which is an asset for any sport. So, if we give her a good base with athletics, she will excel in any sport. Aaron (son) has just started getting familiar with different sports.” Anju believes specialised training for a specific sport should not start before the age of 12. “Before that they should be playing different sports for overall physical development,” believes Anju.

Anju, who trained in an era when athletes were left to their own devices to find the right resources, believes that the Khelo India School Games is a real game changer.

“When we were in school, there was hardly any support to pursue a career in sports. We used to do everything on our own. It was only after we started competing and winning at the international level, people took note of us and only then the government stepped in with support. The kind of a support system that the Khelo India initiative intends to put in place for young athletes will go a long way in bringing an incremental change in India’s sporting landscape,” she said before signing off.