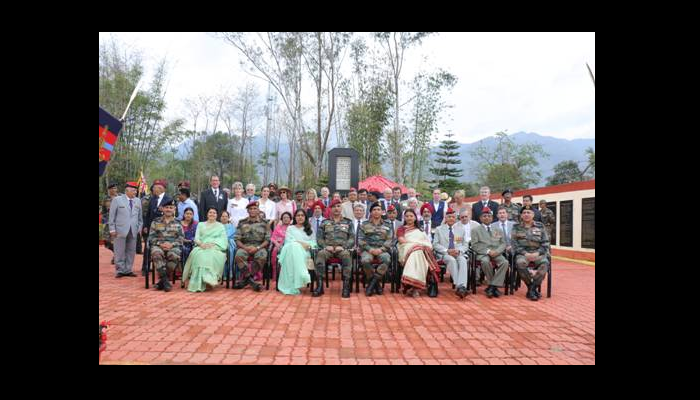 Battle of Kangla Tonbi? If you are hearing the battle’s name for the first time, then this piece is a treasure trove:

The Battle of Kangla Tongbi, considered one of the fiercest battles of World War II, was fought by Ordnance personnel of 221 Advance Ordnance Depot (AOD) on the night of 6/7 April 1944. Japanese forces had planned a three pronged offensive to capture Imphal and the surrounding areas. In their attempt to extend their line of communication to Imphal, the 33rd Japanese Division cut in behind the 17th Indian Division at Tiddim (Mynmar) and establishing themselves firmly on the main Kohima – Manipur highway, started advancing towards Kangla Tongbi. Here at Kangla Tongbi, a small but determined detachment of 221 AOD put up stiff resistance against the advancing Japanese forces.

The position of 221 AOD was not at all sound from a tactical point of view. It was exposed to the enemy from all sides and had to rely on its own combatant manpower for its defence. Major Boyd, the Deputy Chief of Ordnance Officer (DCOO) was made in charge of the operations for defence of the Depot. A Suicide squad comprising of Major Boyd, Havildar/ Clerk Store Basant Singh, Conductor Panken and other personnel from the Depot was created.

On 06 Apr 1944, orders were received to evacuate 4,000 tons of ammunition, armaments and other warlike stores. On the night of 6/7 Apr 1944, the Japanese mounted a heavy attack on the Depot, rushing downhill into a deep nallah which was used as a covered approach to the Depot. A very well camouflaged bunker had been sited by the Depot on this approach. The Bren Gun Section in this bunker having spotted an enemy section within range, opened fire. This shook the enemy and forced the Japanese to withdraw leaving many dead. The Bren Gun was manned by none other than Hav/ Clerk Store Basant Singh.

For this act of gallantry at the Battle of Kangla Tongbi, Major Boyd was awarded the Military Cross (MC), Conductor Panken, the Military Medal (MM) and Hav/ Clerk Store Basant Singh, the Indian Distinguished Service Medal (IDSM).

The Kangla Tongbi War Memorial is a mute testimony to this battle and the unflinching devotion to duty of the Ordnance personnel of 221 AOD, 19 of whom made the supreme sacrifice. It conveys to the world at large that Ordnance personnel, apart from being professional logisticians, are second to none in combat, being equally proficient soldiers, should the occasion demand. As it commemorate the Platinum Jubilee of this hard-fought battle, the spirit of Kangla Tongbi lives eternally in the hearts of all Army Ordnance Corps personnel of the Indian Army and continues to be source of inspiration for all ranks.

The Platinum Jubilee of the Battle of Kangla Tongbi War was commemorated on 07 Apr 2019 by Army Ordnance Corps at Kangla Tongbi War Memorial near Imphal honouring the valiant brave hearts of Ordnance Personnel of 221 Advance Ordnance Depot who made their supreme sacrifice in the line of duty during the battle of World War-II on the night of 6/ 7 April 1944.

The event commenced with wreath laying by Lt Gen Dalip Singh, VSM, DGOS & Senior Colonel Commandant as the chief guest, Veteran Officers and next of kin of Britishers who participated during the Kangla Tongbi Ops and Descendants of Indian Martyrs. The event was also witnessed by the representatives of the local civil administration. The locals enthusiastically participated during the complete event.

Apart from laying wreath at Kangla Tongbi War Memorial, the DGOS & Senior Colonel Commandant, senior dignitaries and next of kin of the Britishers and descendants of Indian Martyrs visited the Kangla Tongbi Children’s Home. To commemorate the occasion and as a matter of charity, the inmates were presented with gifts during the interaction with them.

Assam regiment and the legend of ‘Badluram Ka Badan’