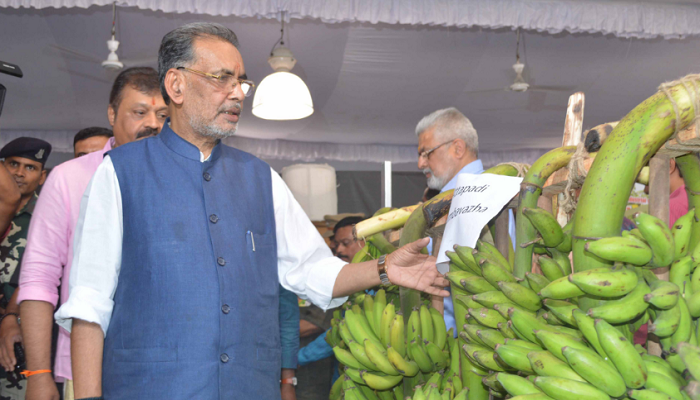 The Union Agriculture & Farmers Welfare Minister, Radha Mohan Singh addressed at the National Banana Festival, 2018 held in Thiruvananthapuram, Kerala on 17th February 2018. Radha Mohan Singh highlighted the importance of banana and said that the banana and plantains are a major staple food crop for millions of people in tropical developing countries, have a history of over 4000 years, dating back to 2020 BC.

He also said that the banana is native of India and is widely grown in tropical, sub-tropical, and coastal region of India. In the recent years, there is a growing recognition of the importance of banana and plantains as household food, nutritional security, as well as social security in many parts of the world. In India, there has been a significant increase in terms of area, production, and productivity in the last two decades.

Today, banana is cultivated in more than 130 countries across the world in 5.00 million hectare and yielding 103.63 million tonnes of banana and plantain (FAO, 2013). India is the largest producer of banana in the world with 29.7 million tonnes from an area of 0.88 million hectares with a productivity of 37 MT/ha. Although India accounts for only 15.5per cent in area, its contribution in the world’s production is 25.58per cent. Thus, banana has emerged as one of the important fruit crops, which is easily available to common man. It is predicted that with ever-increasing demand, 60 million tonnes of banana will be needed to meet the domestic demand in 2050. There is also a considerable scope for the export of banana and its products, which further enhances the demand. Bananas and plantains are continuously showing an impressive growth worldwide. It’s year round availability, affordability, taste, nutritional and medicinal value makes it the favourite fruit among every section of the society with good export potential.

World banana production is concentrated in Africa, Asia, the Caribbean and Latin America because of the climatic conditions. Production and productivity of banana has considerably increased with expansion of area due to interventions under Mission for Integrated Development of Horticulture, which promotes adoption of High Density Planting, use of Tissue Culture Plants and other interventions in Post-Harvest Management (PHM) infrastructure. So far, 11,809 pack houses and 34.92 lakh MT of cold storage capacity have been created in the last three and half years. The growing awareness of banana for its nutrition high economic returns, and export potential, area under banana cultivation has increased. In three and half years, Banana Producing Farmers have benefitted from Mission for Integrated Development of Horticulture (MIDH) scheme initiated by the Modi Government.

Here are 5 best options to choose after Graduation

Due to urbanization and erosion of wild bananas in their natural habitat, there is a need to conserve the available genetic diversity. Musa wild species and its allied species form an important source for resistant genes for biotic and abiotic stresses. Biotic and abiotic stresses are the main constraints, which reduces the productivity considerably. Production constraints also vary from region to region, however, many problems are similar in nature. This complexity of problems calls for basic, strategic, and adaptive research to maximize the productivity.

Banana and plantain breeding has its inherent complex problems and recent biotechnology tools/approaches help in achieving the projected results, and the real impact can be expected in the near future. With a production target of 60 million tonnes in 2050, the major production constraints like increasing input costs such as fertilizers, irrigation and management of insect pests and diseases like TR4 are being done to maximize the production.

The minister later informed that new initiatives are being taken to give a fillip to the areas like genetic engineering, molecular breeding, organic farming, integrated pest and disease management, physiological, bio-chemical and genetic basis for biotic and abiotic stress management, adoption of post-harvest technology, use of ripening chamber and value addition from waste to wealth.

He said: I am sure that deliberations made in the conference will form the base for strengthening research and opening up new opportunities to fulfil its mandate in banana research and address the future challenges for higher growth and development, so that doubling of farmer’s income could be achieved.