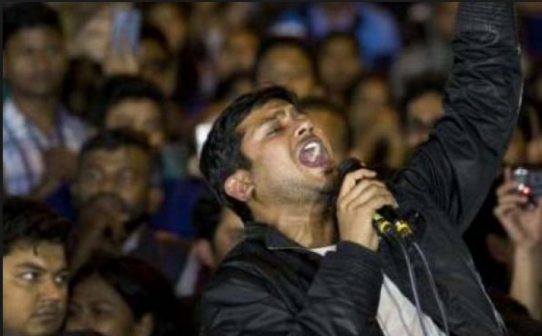 A new poster has come up in JNU that says that Hindu festival Holi is an anti-women festival that has historically sexually violated Dalit women. We have one shot of the poster but we cannot authenticate it as yet. This poster has been put up by an unknown group calling itself Flames of Resistance (FOR) to which students have not heard of as yet. As usual, the poster had the words such as the ‘Brahmanical’ and ‘patriarchal’ words sewn into the poster, which is the hallmark of student politics in the JNU campus.

It seems, that the poster was put up with the motive of raking up JNU controversy but it failed to create any impact just like abusing Hindu goddess failed to draw attention of students in the campus. Also, considering that JNU controversy has already been hijacked by social media, therefore, in upcoming days these methods would become staler, eventually losing out the ‘shock’ appeal that first made people curious, then angry and now simply a thing to make jokes on.

Even the poster boy of JNU and Left front’s last hope, Kanhaiya Kumar is turning out to be an embarrassment. First, he has not said anything clear on the publicly urinating in the campus incident, then his comparison with Bhagat Singh did not get him to say a word of protest and now he has said that 1984 Sikh riots were different from that of the 2002 riots. How?

PTI reported that Kanhaiya made these statements:  “During Emergency, goons of only one party were engaged in goondaism. In this (fascism), entire state machinery is resorting to goondaism.”

His knowledge is flimsy and shows that he is still suffering from the foot-in-the-mouth disease. But that is Kanhaiya, why are leaders like Rahul Gandhi not openly coming out and telling him that he is immature? This is a dangerous trend where an irresponsible young man is being more importance by certain sections than the seasoned leaders. Not only is this bad for the parties but bad for the country as well.

But it is heartening to note, that an average Indian can see through the games that are being played and has refused to do more than poke fun and move on. This is where the strength of the country lies and this is a lesson for our politicians as well; Indians are smarter than you think, pull up your socks and work!