Union Minister for Urban Development, Housing & Urban Poverty Alleviation, Information & Broadcasting Venkaiah Naidu today announced the new 27 smart cities. also said that he was delighted to state that the Smart City plan was running ahead of the schedule.

The Minister while announcing also said that he was delighted to state that the Smart City plan was running ahead of the schedule. With this the number of cities selected under Smart City Mission for financing implementation of smart city plans has gone up to 60.

Announcing the cities that were selected in a competition among 63 cities, Naidu said:

“The willingness and enthusiasm among cities to participate in more than one round of competition is a clear evidence of the urban renaissance set in motion. Competition bases selection has made the cities rediscover themselves as they are undertaking a thorough assessment of gaps in the present levels of infrastructure and service delivery and come out with comprehensive, credible and actionable plans for area based development and technology based Pan-city solutions”

The Minister informed that the new 27 smart cities have proposed an investment of Rs.66,883 cr under smart city plans including Rs.42,524 cr under Area Based Development and another Rs.11,379 cr for technology based Pan-city solutions that benefits all the citizens of respective cities. With this, the total investment proposed by the 60 cities selected so far has gone up to Rs.1,44,742 cr, he said.

The 27 new smart cities are: 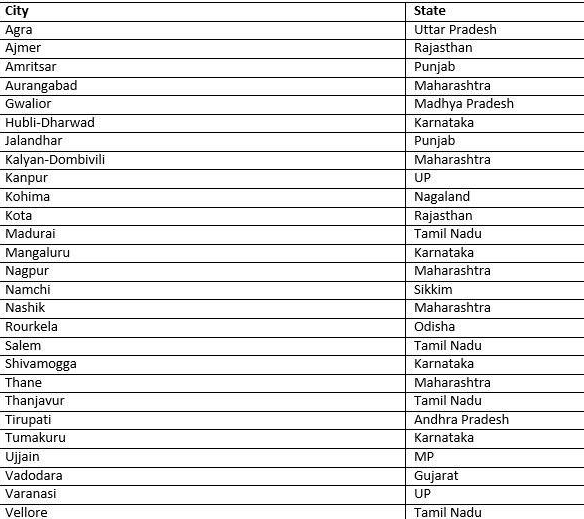 From Maharashtra 5 smart cities have been selected and they are Aurangabad, Kalyan-Dombivili, Nagpur and Nashik.

Tamil Nadu has 4 smart cities in the list; Madurai, Salem, Thanjavur and Vellore.

Uttar Pradesh with three cities; Kanpur, Agra and Varanasi got selected. Prime Minister Narendra Modi had scored a massive victory from Varanasi and with the Uttar Pradesh elections coming near, it surely is a good sign for the central government which has been saying that its primary agenda is development.