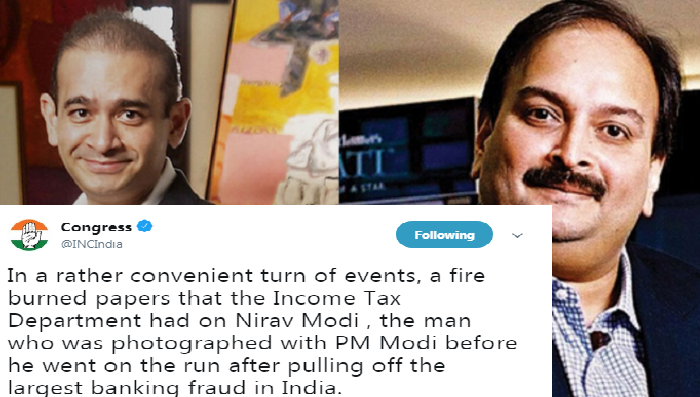 The government has said that the records related to the investigation into the Nirav Modi and Mehul Choksi case were safe as they were transferred out before a fire broke out in the Income Tax Office in Mumbai thus busting the fake and unverified news doing rounds.

In a rather convenient turn of events, a fire burned papers that the Income Tax Department had on Nirav Modi, the man who was photographed with PM Modi before he went on the run after pulling off the largest banking fraud in India.

The government clarification came following media reports claiming the records were destroyed in the fire. It read:

“News reports have been appearing in some sections of the media alleging that records & documents relating to investigation into the Nirav Modi/Mehul Choksi case have been destroyed in the Scindia House fire in Income Tax Office in Mumbai. It is hereby clarified that the said reports are completely false & misdirected.

It is further clarified that the records/documents of the ongoing investigations into the Nirav Modi/ Mehul Choksi case had already been transferred to the assessment units housed in different buildings, as part of the assessment process.

Apprehensions about any loss/ damage to the records/documents relating to the Nirav Modi/Mehul Choksi case in the said fire at the IT Office, Mumbai are, therefore, misplaced.”

News reports appearing in some sections of media alleging that records/documents relating to investigation of Nirav Modi/Mehul Choksi have been destroyed in the Scindia House fire in ITOffice,Mumbai are completely false & misdirected @PMOIndia @FinMinIndia @arunjaitley @adhia03

It is clarified that records/documents of ongoing investigation of Nirav Modi/ Mehul Choksi case had already been transferred to assessment units housed in other buildings as part of assessment process. Apprehensions of loss/damage to records(Scindia House,ITOffice fire)misplaced

Did Narendra Modi really model for Reliance Jio or Paytm?