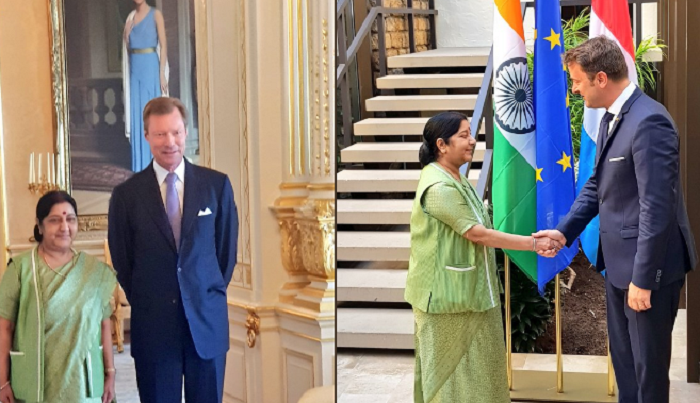 India-Luxembourg ties are on an upswing.

Trade and investment are the bedrocks of India-Luxembourg ties. The Luxembourg headquartered European Investment Bank recently opened its South Asia Regional Office in New Delhi. A number of Indian companies are also listed on the Luxembourg Stock Exchange.

During her visit, the External Affairs Minister called on the Grand Duke of Luxembourg Henri Albert Gabriel Félix Marie Guillaume.

External Affairs Minister called on Xavier Bettel, the Prime Minister of Luxembourg. During the call on, the leaders discussed a wide range of issues including enhancing bilateral and India-EU trade and investment ties, digital and space cooperation, fintech and diaspora contribution.

EAM also had a meeting with her counterpart, Jean Asselborn, Minister of Foreign and European Affairs. During the meeting, both sides undertook a complete review of India-Luxembourg political bilateral relations. They also had extensive discussions on regional and multilateral issues.

In Luxembourg, EAM also had an opportunity to interact with the Indian community at an Embassy organised reception.