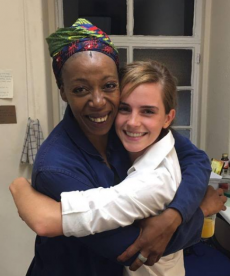 New York, June 8, 2016: When two Hermiones meet, what do yo expect? Magic and a whole lot of intellectual discussions on the current situation of ‘magical beings’! Isn’t? Well! there was indeed ‘magic in the air’ when Emma Watson met actor Noma Dumezweni backstage at the Palace Theatre. who is playing Hermione in the Harry […]

Urvashi Rautela, Vivek Oberai, Ritesh Deshmukh, and Aftab Shivdasani-starrer Great Grand Masti is now on torrent websites, much before its slated July 22 release. The movie has met a fate similar to Shahid Kapoor-starrer Udta Punjab, which was also leaked online before its official release. Many are questioning the role of censor board as the […]

New Delhi, June 21, 2016: Mohenjo Daro trailer is out and it has Hrithik all over it. It was earlier thought that movie would be more on the lines of Jodhaa Akbar, i.e. it would be a real piece of history, but it is a fictional work. The movie is releasing on  August 12 this […]

New Delhi, June 15, 2016:  Indians love Jackie Chan, but what they are about to see will make them fall in love with the actor all over again! The legendary Asian actor of Chinese origin danced on a tune of Indian pop artist Daler Mehndi where he was matching steps with our very own Indian […]

New Delhi, June 1, 2016: There is a reason why Shah Rukh Khan has ruled the imagination of a billion plus nation for so long; he is a man of class who never fails to stir our emotions. Just a while back our handsome and gracious Shah Rukh Khan shared a small video which if […]

New Delhi, May 1, 2016: KRK, is not the one to hold back his words; he is hated for speaking his mind and he is also loved by his fans for the very same reasons. But it goes to the credit of KRK that he knows his stuff and researches hard. True to the form KRK […]

New York, May 1, 2016: Anushka Sharma looks a fierce fighter in the second trailer of Sultan. This is the second trailer after a power-packed tease of Haryana ka Sher Sulta and  it is high time that we get a a glimpse of Sultan ki Jaan – Aarfa! Today is also the lovely girl’s birthday […]

New York, April 14, 2016: Sachin A Billion Dreams, the movie on the life of the God on cricket is making all the right noises. The inspiring official traitor has people feeling the nostalgia when Sachin Tendulkar used to be the hope of Indian cricket. Check the trailer here: Releasing the trailer Sachin Tendulkar wrote: […]

New York, April 13, 2016: Udta Punjab is making all the right noises thanks to the rakishly handsome and pumped-up Shahid Kapoor! The movie also stars Bollywood beauties Alia Bhatt and Kareena Kapoor Khan and also actor Diljit Dosanjh in pivotal roles. Here is Shahid Kapoor starrer sneak-peak and needless to say that he has […]