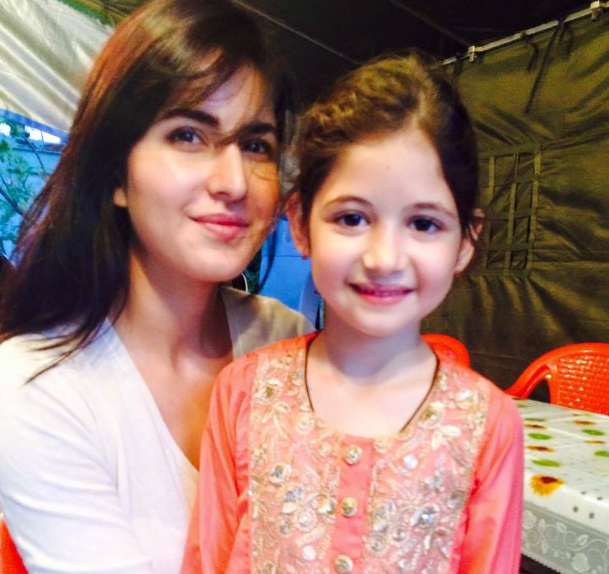 Harshaali Malhotra wished Bollywood babe Katrina Kaif by sharing a cute pic of her with the actress.

All she wrote was Happy Birthday Katrina Kaif auntie and the internet broke down!

People started advising the little girl to not call Katrina Kaif auntie and instead address her as ‘didi.’

Some people tried to reason that for Harshaali Malhotra, Katrina Kaif was indeed the auntie and that when the actor herself had no issues being called one, then, no one else should have any.

Actually, the problem is the usage of the term auntie in the Indian context where auntie unanimously means a drab, non-existent, and a pestering woman in her middle age who has no colors left in her life.

Young girls are often called ‘behenji-turned-mod’ or ‘auntie-turned-mod’ and what not to highlight that the girl is trying to ape a fashionista but is only making herself seem ridiculous. So those, who got angry at the usage of the term auntie for the beauty Katrina Kaif indeed had a point.

For a normal woman being called auntie may be acceptable but Katrina Kaif is Katrina Kaif, and therefore, the brouhaha from her fans!

Therefore, being called auntie is a serious sort-of insult, especially when directed against an actress who is still in her prime as far as the career goes.

Remember the infamous controversy where Sonam Kapoor allegedly called Aishwarya Rai Bachchan auntie? It really had all the Bollywood up in arms against the then raw Sonam Kapoor who later clarified that she never even said the term and that if she had to address Aishwarya then she would do so respectfully but never as auntie!

Remember the famous headline ‘Aunty National’ that was made on Smriti Zubin Irani by the Telegraph that had people up in arms at the insult dished to a senior leader like her?

And don’t forget what KRK had to say about these ‘aunty-types’ of Bollywood. In short, aunty is a serious insult in most cases.

But kudos to Katrina for being a sport and replying sweetly to Harshaali Malhotra with a cool and crisp “Thank You Love.” So much to learn from this girl!