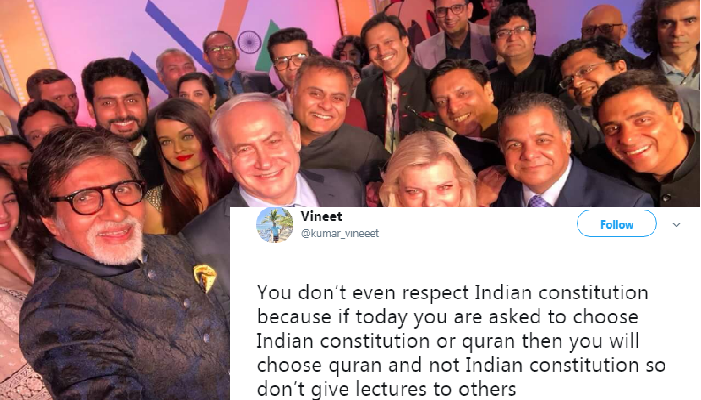 Ajaz Khan is busy raking controversies on Twitter but his heart is firmly set in Quran.

He was unhappy with Amitabh Bachchan and others for posing with the Prime Minister of Israel, Benjamin Netanyahu and therefore, choose to make himself clear.

He tweeted to the senior Bachchan that Netanyahu is a killer and he killed so many children and so many innocents. Probab

Khan further stated that he lost respect for Amitabh Bachchan and everyone who was in this pic.

To this, a user retorted that this was unfair and tried to show him a mirror. A user named Vineet shot back:

To this, actor Ajaz Khan in a way simply reiterated what Vineet had said and wrote, that ‘Yes I will choose Quran Any Day Any time.’

Yes I will chose Quran Any Day Any time

Ajaz Khan was earlier in the news, when he had targeted Prime Minister Narendra Modi and Yogi Adityanath on gau rakshaks.

Quran set on fire in Pakistan, Hindus fear for their safety