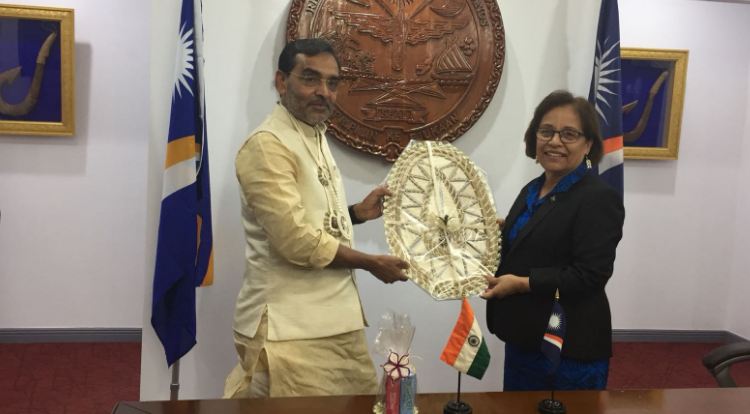 During the visit, MoS paid a Courtesy Call on Dr. Hilda Heine, President of the Republic of Marshall Islands and held wide ranging discussions with the Minister of Foreign Affairs  John M. Silk and several Cabinet members of the RMI. Both sides reviewed bilateral relations and reaffirmed their commitment to further advance ties in a host of areas such as blue economy, adaptation-mitigation practices for climate change, disaster preparedness, health, education, renewable energy among others. The two sides mentioned that the first ever visit by INS Satpura to RMI in August 2016 had further strengthened and diversified the bilateral ties.

In the field of education, healthcare and wellness, acknowledging the importance of yoga, RMI side showed keenness in disseminating yoga to youth through schools and to also tap into India’s expertise in overcoming physical connectivity challenges through tele-medicine and tele-education.

In view of the growing bilateral collaboration in the field of solar energy, RMI also shared its interest to join the International Solar Alliance (ISA) at the earliest. On the issue of UNSC reforms, Republic of Marshall Islands acknowledged the need for early reform of the Council and expressed strong support for India’s permanent membership at the reformed UNSC. On behalf of the Government of India, MoS extended an invitation for President of RMI to visit India at a mutually convenient date.

During the visit, based on a request from the Republic of Marshall Islands side, India committed to extend a grant of USD 300,000 for a Water and Sanitation Project Proposal of Aur Atoll Local Government. Since 2005, India has extended grant assistance to the tune of USD 1.35 million for various projects relating to purchase of equipment, disaster relief, national export strategy, community and local government projects harnessing solar energy among others. India also offers five slots to nationals of RMI under the Indian Technical and Economic Cooperation (ITEC) programme.

The Republic of Marshall Islands and India sides also discussed ways to cooperate under the framework of Forum for India Pacific Islands Co-operation (FIPIC). India engages with the Pacific Island Countries on a wide range of issues including climate change. FIPIC was formed in November 2014, to strengthen India’s relationship with the Pacific Island Countries. The first FIPIC summit was held at the level of Heads of Government in November 2014 in Suva, Fiji, followed by the FIPIC-II summit held in August 2015, in Jaipur, India. Government of India also hosted a ‘India-Pacific Islands Sustainable Development Conference’ in Suva, Fiji from 25 to 26 May, 2017.