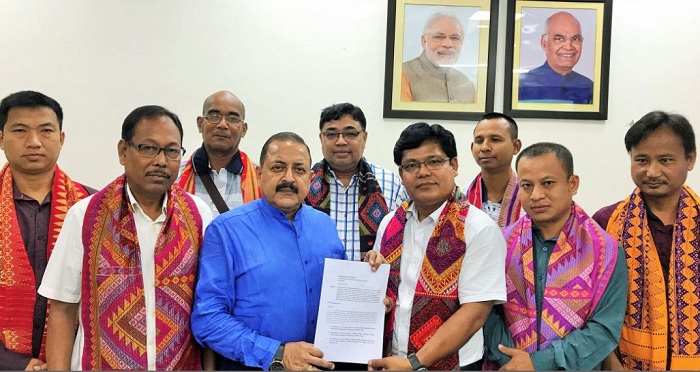 A delegation from Garo Hills representing various tribal organizations from Meghalaya called on the Union Minister for Development of North Eastern Region (DoNER), Dr Jitendra Singh in New Delhi on July 21st 2018  and discussed issues concerning them. They also presented a memorandum listing their demands. The organizations represented in the delegation included the Hajongs, Rabhas, Koches, Boro-Kacharies and Manns tribes.

The other main demands put forward included job reservation in the GHADC for other tribes and implementation of para 1 (2) of the 6th Schedule for creation of an “Autonomous District Council” for indigenous tribes like Hajongs, Rabhas, Koches, Boro-Kacharies and Manns.

In a detailed memorandum, the members of the Garo Hills delegation submitted that the State of Meghalaya has always been perceived to be inhabited by only three tribal groups, namely, the Khasis, the Jaintias and the Garos. However, it was submitted that there are other indigenous tribal communities in the State as well, which have been feeling neglected for a long time, in spite of owing their origin to the State since times immemorial.

Temple desecrated and vandalized by miscreants in Manipur

The memorandum further complained that the stakeholders who have so far been invited for discussion regarding the amendment of the 6th Schedule of the Constitution in respect of strengthening the Garo Hills Autonomous District Council, have mostly been from the three tribal communities of the Khasis, the Jaintias and the Garos. The delegation submitted that the views of other communities should also be invited and incorporated.

No Greater Nagaland will be carved out, government shoots down rumors

Dr Jitendra Singh gave a patient hearing to the members of the delegation. He said, since the issues raised by the delegation went outside the purview of the Ministry of DoNER, he would therefore, take up their issues with the other concerned Ministries including the Ministry of Tribal Affairs and Ministry of Minority Affairs, and also forward the memorandum submitted to him to these Ministries.

Modi government is sending Bru persons back to Mizoram