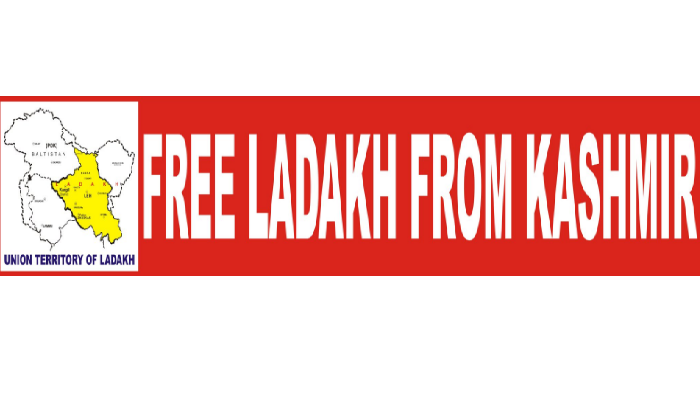 Ladakh Buddhist Association is one of the most important Buddhist bodies in Ladakh and its youth wing has made an appeal to Indians. The appeal has been produced without any changes:

An appeal to the biker community, travelers to Ladakh region and to the citizen of India. Please spread this message to every Indian citizen. We are also requesting all the travelers to use the picture below as a sticker on your vehicles along with a prayers flags.

We will appreciate your support for our genuine and constitutional demand for ethical survival.
Please share with every single person and leadership of the country!!!

Ladakh’s political merger with J&K did not form any natural cohesion and proved to be a folly throughout. Despite being a part of the Kashmir Division, Ladakhis have never been involved by the Kashmiris in any debate or discussion or any decision making processes. We have nothing to do with the present disturbing situation in Kashmir and with those who wish to secede from India.
Ladakh is fundamentally distinct from Kashmir in all respects-culturally, ethnically, linguistically and geographically. Ladakh remains cut off from rest part of J&K for 6 months in a year during winter. The degree of heterogeneity among the three regions is extremely high not only in form but also in sharpness. Frederic Drew, who served as Governor of Ladakh in the 19th Century had rightly observed that “the territories of J&K have no other bond of cohesion than the fact of Maharaja’s rule, no simple name for it exists”.
At the time of the British plan to partition India, our elders had proposed in advance to the J&K Maharaja’s Praja Sabha that the Maharaja should govern Ladakh directly without tagging it on to Kashmir valley or Ladakh be amalgamated with the Hindu majority Jammu and should form a separate province in which adequate safeguard should be provided for distinctive rights and interests of Ladakhis or Ladakh should be permitted to join East Punjab. Circumstances led the Maharaja to relinquish his position and Ladakh became an integral part of India under the Instrument of Accession signed by Maharaja Hari Singh on 26th October 1947 subject to ratification by the people of the State.

Apprehensive of their future, a delegation headed by Kalon Chewang Rigzin, President, Ladakh Buddhist Association approached the then Prime Minister of India Pandit Jawahar Lal Nehru and submitted a memorandum in New Delhi on 4th May, 1949 which concludes as under:- “ Ladakh is not prepared to go to Pakistan whatever the result of the plebiscite may be”. The memorandum further but forth a poignant appeal to India – “We seek the bosom of that gracious mother (India) to receive more nutrient for growth to our full stature in every way. She has given us what we prize above all other things-our religion and culture. The Ashoka wheel on her flag, a symbol of goodwill for all humanity, and her concern for her cultural children call us irresistibly. Will the great mother refuse to take to her arms one of her weakest and most forlorn and depressed children – a child whom filial love impels to respond to the call?”

Ladakhis since then have consistently been demanding separate region from Jammu and Kashmir State and asking for the status of Union Territory for the area. It was in 1964, a massive agitation was launched under the leadership of Ven. Kushok Bakula demanding NEFA type Central Administration. A similar agitation was repeated under the leadership of Ven. Lama Lobzang, Thupstan Chhewang and Tsering Samphel in 1974. Shri. P. Namgyal, MP (who was Union Minister in 1987 – 90) headed an agitation demanding Regional Autonomy in 1982. But instead of satisfying our democratic rights and aspirations, the successive Kashmiri rulers severely suppressed the democratic movements through the State Police.

The 1989 agitation spearheaded by LBA for UT status for Ladakh coincided with the eruption of insurgency in Kashmir gaining momentum. Farooq’s Government instead of nipping the secessionist movement in the bud chose to let out his anger on the peaceful demonstration in Leh resulting in loss of lives, plundering and attacking houses, and putting hundreds of peaceful agitators behind the bars.

With the intervention of the then Hon’ble Prime Minister Shri Rajiv Gandhi and keeping in mind the explosive situation in Kashmir and the larger national interest, the Ladakh Buddhist Association suspended its demand for UT status and accepted the dispensation of LAHDC1 somewhat on the lines of Darjeeling Gorkha Hill council as a compromise under the tripartite agreement reached between the State Government, the Central Government and the Ladakh Buddhist Association on 29th October, 1989. It is, however, most unfortunate that the Government did not actually allow any quantum of autonomy to be exercised by the democratically elected LAHDC and also starved it of funds. It is ironical that the same Government is now pleading for greater autonomy for the state. Besides the political turmoil in J&K has a remote sign of salvation and settlement.
Under these circumstances, we are left with no choice but to reiterate our longstanding demand for granting UT status to Ladakh, which would guarantee us an administrative set up to run our own affairs and safeguard our interest. In the modern times, when the whole world is passing through the process of decolonization to enjoy the fruits of democratic national independence, we the people of Ladakh and our land still continue to suffer under the old concept of colonial administrative structure, pushed under an oppressive political domination of Kashmiris and subjected to discrimination in all respect. (See Annexure A) Therefore a realistic solution to the problems in J&K can only be found if the State is reorganized on the linguistic and ethnic basis, as was done earlier in the case of other States.

Our demand for UT with the legislature is not an anti-national activity. The State Re-organisation Commission set up in 1956 had recommended carving out of more States and UTs on linguistic basis. India had only 14 States in 1952 which has grown upto 28 states, 7 UTs by now. Carving out new States and UTs are a continuing process in a democratic country. USA has 50 states with a population of 27 crores. It was unfortunate that the jurisdiction of State Re-organisation Commission was not allowed to extend its jurisdiction over Jammu and Kashmir in 1950s, due to its special status thus hitting hard to the very interest of its subjects. J&K State, is a inseparable part of India, hence sky will not fall if a State or UT set up is carved out of present J&K State. Ladakh fulfills all criterions to be a UT with the legislature as:-
• Ladakh occupies 69.6% geographical area of whole of J&K.
• It is populated by different ethnical stocks speaking their own language quite different from those of Jammu & Kashmir.
• Ladakhis have different and unique cultural heritage rarely found elsewhere in the world.
• There is no commonality between Kashmir valley, Jammu and Ladakh in their landscape, atmosphere, climate and topography and remain cut off from each other for months during winter season.
• Strategically, Ladakh deserves utmost attention and special treatment in infrastructural development as is bordered with two unfriendly countries.
• Ladakh is the focal point of Central Asian trade routes and need promotions in all perspectives.

The Merits of Union Territory Status with legislature for Ladakh
• It will boast the identity of Ladakhis.
• It will attract sufficient funding for its all round development. In size the beautiful group of Island Lakshadweep is the same as Ladakh but its population is less than one third that of Ladakh. Yet, as UT it has a budget of more than 400 crores rupees a year as against less than a hundred crores a year for LAHDC, Leh.
• It will give a sense of security particularly among the Buddhist who feel that ethnic cleansing from the soil of Kashmir forcing the Hindus for exodus followed by constant threat to the Sikhs to leave the valley will lead the swords drawn towards Buddhists for similar fate in present dispensation.
• It will provide space for promotion of its rich language and its script.
• It will provide a peaceful and calm political atmosphere away from the never ending political turmoil, insurgencies and militants onslaught prevailing in Kashmir valley and many a parts of Jammu region.
• It will provide long lasting opportunities to preserve and promote the unique art and cultural heritage of Ladakh.
• It will open more avenues in providing more representations and participations in the democratic process of Ladakh in particular and at national level in general.
• The vulnerability to exploitations and discriminations of Ladakhis will be non-existant resulting moral boosting to the Ladakhis.
• It will boost the pride and dignity of Ladakhis as the feeling of subservient to other will be non existent.
• It will showcase the Government of India’s sensitivity to the protection and preservation of a unique landscape in the world ornamented with a unique ethnical population with extra-ordinary rich cultural heritage which is at the verge of extinction.