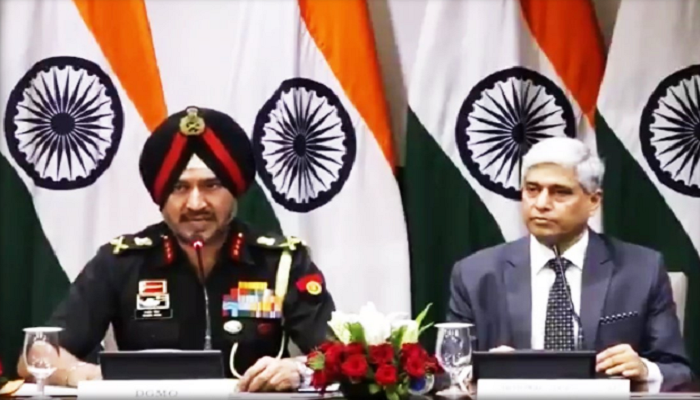 Indian Army struck back at the terrorists at the LoC on Wednesday night, the DGMO said today in a short-notice press conference to tell the countrymen on the development. India has taken its revenge for the Uri attack.

Needless to say, DGMO Ranbir Singh took the press by surprise when he said that the operation has ended and that the terror bases suffered casualties in these strikes.

He said that the terror launchpads were seen “along the LoC,” when asked which side, clarified “across the LoC.”

We have ended operations, signaling India’s approach. But we are prepared for any consequences. DGMO also said that they have spoken to Pakistan DGMO and shared our concerns. We cannot allow terrorists to operate along LoC.

He reiterated the position of India saying that:

We cannot allow terrorists to operate along LoC.

Pakistan response to the statement stating that it was the ‘unprovoked & naked aggression of the Indian forces, and due to firing, two Pakistani soldiers died and 9 are still injured. Pakistani forces retaliated and the Defence Minister Khawaja M. Asif said that he does not know the Indian casualties so far. He said that this was pre-planned response by India:

Updates on unprovoked & naked aggression of Indian forces that took place in the wee hours of last night… pic.twitter.com/KfgOf7MvKT

India stands by the Indian Army

India woke up to the news of Indian Army’s surgical strikes and right from Arvind Kejriwal to all the political groups have supported the act.

It is significant that this attack took place when the nation was remembering the great Indian martyr Bhagat Singh yesterday.

But, there are many questions that remain to be answered. What were the Pakistani army officials doing in the terror launch pads? Has India perfectly called Pakistan’s bluff of being prepared to handle any attack from India? Has Narendra Modi done the right thing in giving Indian Army a free hand in cross-border matters? Please submit your answers in the comments below!