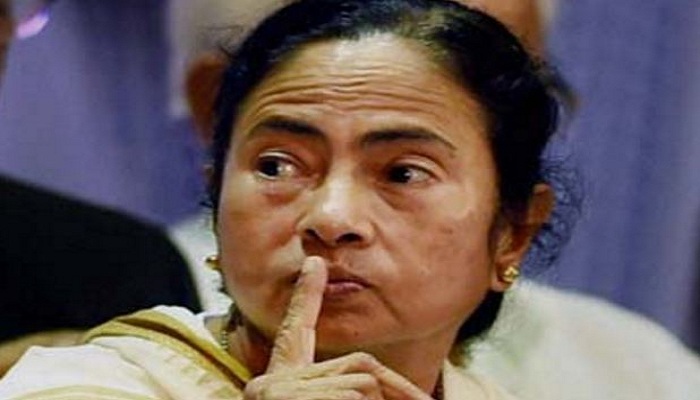 Mamata Banerjee has for the first time spoken against communalism and yet she has not issued any statement on the situation in West Bengal of which at least four districts are affected by it.

Condemning terrorism, Mamata Banerjee, the Chief Minister of West Bengal vaguely hinted that communal terrorism is more dangerous than anything but said nothing further.

West Bengal has been seeing communal violence in Hazinagar in the North 24 Paraganas, Chanchal subdivision of Malda, Chandannagar in Hooghly and Kharagpur city in Paschim [West] Medinipur and other areas for a past few days but CM Mamata Banerjee has not spoken anything on it. But the police has failed to contain the flare ups.

We condemn terrorism as a threat to peace, stability,prosperity.
We equally condemn communal terrorism that is more dangerous than anything

In Malda, in the beginning of the year, West Bengal saw perhaps one of the worst riots in independent India when the mob attacked the minority Hindu community after a Hindu Mahasabha leader Kamlesh Tiwari spoke unflattering words about Prophet Muhammad. Many commentators have been worried about West Bengal and the lack of adequate coverage of the many communal disturbances in the mainstream media.

West Bengal will see Hindu Samhati rise, what will Mamata Banerjee do?

In West Bengal, a Hindu NGO Hindu Samhati is making quick inroads and has posted several instances of violence in which the women and men from the Hindu community are shown as the sufferers. Many from the ‘elitist’ political groups dub the group as a right wing outfit to trivialize its reports and yet, it was the first one who alerted about the many riots that West Bengal has seen beginning with Malda to the situation now.

This NGO is becoming popular by the day while the mainstream political groups are unable to tackle communal outbreaks. The silence of Mamata Banerjee and other regional stalwarts is another problem; when the elected politicians don’t do the job then people will go to who they put their trust in next, even when they are not their elected representatives. In Hindu Samhati’s case, this holds much truth and dismissing it or calling it right-wing or brushing it aside won’t do Mamata’s administration or other political players any good.

Instead, Mamata Banerjee must speak in clear terms and be fair in dealing with the situation or else she would lose the trust of the very people who have been her strength till now.

Hindus get relief, may celebrate Durga Puja in this West Bengal village