Sri Reddy is unstoppable! This time her target is Nani.

In a cryptic post that has people wondering Sri Reddy wrote:

Earlier too she had lashed out at Nani and had written:

You act very well in the real life also..on screen also natural..you look natural..but that’s your mask..you always say that you struggled in your life, but that is the emotional hatyachar (manipulation) to the people..you always play super drama in front of the people..big heroes are better in front of  you, who has their parents and grandparents support..all they are well mannered and well disciplined.. learn from Charan, Mahesh babu, Junior NTR such  great co stars..they do not have ego at all..and you have a lot of a attitude..you can’t respect small directors who are upcoming, such a bad attitude you got (now) that you  have succeed(ed)..You got a kid recently great congratulations ..but be careful in your life, because you used so many girls vag$nas.. girls are still crying who (were) f**k..d by you badly..but remember God always will be (on the) justice (‘s) side..might be, (it) takes time to punish..but you will suffer.

Sri Reddy has been fighting a largely lone battle against casting couch and she even earned the ire of Pawan Kalyan and his fans for her abusive rants against him and his mother.

Here are the screenshots of the messages that she shared: 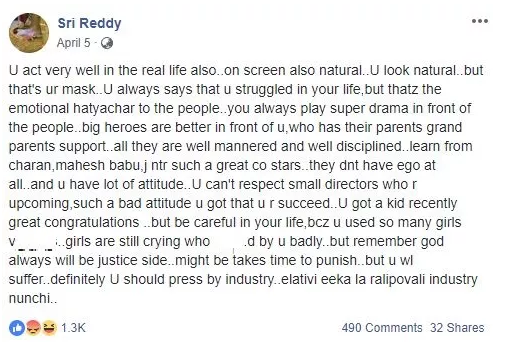 “He locked the room, beat me, and resorted to sexual assault“

There are many women who have come out against sexual harassment in different professions in India. But how far will they have to fight? That only time will be able to tell.