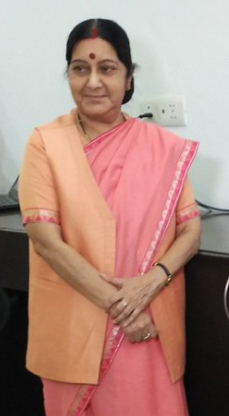 New Delhi, July 16, 2016: Sushma Swaraj knows the art of winning hearts through her work, but she also effortlessly wins hearts with as little as a tweet!

Swaraj had informed the Indian public that the Indian government has successfully been able to rescue Indian citizens Sai Srinivas and Anish Sharma from their abductors in Nigeria. To which a person opined that it seemed that the Minister had served in the army as she always has a tactical approach to crisis situations.

But Sushma Swaraj responded to the delight of many that she would have definitely joined the Army but then at that time women were not allowed in the forces and now she cannot as she is overage!

I would have definitely joined the Army. But at that time women were not allowed in the armed forces. Now they say I am overage.@wadoos

Her reply earned her applause as many started calling her lady Singham while many appreciated the lady for her reply and for the way she runs her ministry!