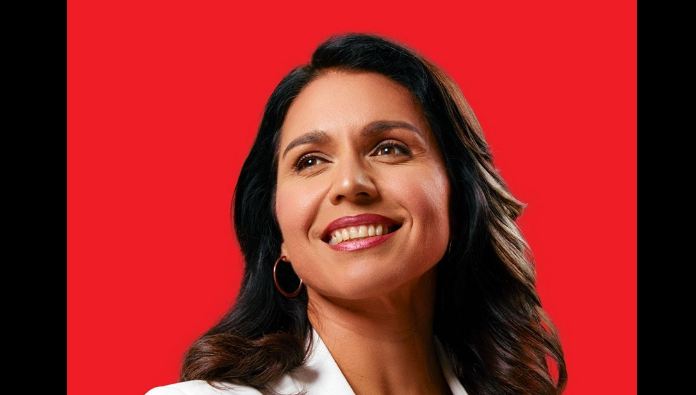 Democratic Party’s first Hindu Presidential candidate Tulsi Gabbard launched a fierce attack on former US president Bill Clinton’s wife Hillary Clinton on October 19th for smearing her with ‘Russian asset’ comment that she made during a chat-up session.

Tulsi Gabbard has come under attack from several quarters for not toeing the line of her party that is still ‘managed’ by Hillary’s aides.

Called an Assad apologist for not agreeing for a US attack on overwhelming-Muslim Syria, she has been constantly under fire for long with many questioning why ‘she is even running’ for President. The sheer bigotry and abuse of the Hindu candidate show just why Governor Bobby Jindal had to turn Christian. You have to if you have any political ambitions!

This bigotry is not limited to Hillary or her folks in the established media but is widespread with many bringing Assad and Putin and questioning her loyalty to her country but there is certainly more than what meets the eye. In comments directed at her, one can often spot her faith being questioned with many claiming she is part of some cult. The cult being questioned is ‘Hinduism.’

Tulsi Gabbard called out Hillary and her stooges in an epic takedown saying:

Great! Thank you, Hillary Clinton. You, the queen of warmongers, embodiment of corruption, and personification of the rot that has sickened the Democratic Party for so long, have finally come out from behind the curtain. From the day I announced my candidacy, there has been a … concerted campaign to destroy my reputation. We wondered who was behind it and why. Now we know — it was always you, through your proxies and … powerful allies in the corporate media and war machine, afraid of the threat I pose. It’s now clear that this primary is between you and me. Don’t cowardly hide behind your proxies. Join the race directly.

But Tulsi’s faith and her policy of not forcibly overturning governments for either oil or smugness is largely an unacceptable proposition for most in her party and for established media.

Therefore, it is here that it becomes amply clear that Hillary’s presidency was the ultimate bad news for Asia that it was able to escape by a whisker.

Now, Christine Assange, mother of Wikileaks founder Julian Assange has also come out stressing that Tulsi Gabbard is being attacked with ‘Russian Asset’ smears because Gabbard was against the prosecution of her son. Wikileaks had tweeted that Hillary wanted to take out Julian Assange so bad that she asked ‘can’t we just drone this guy?’

Hillary later failed to recall this bit but the tweet by Wikileaks is here to stay.

Hillary’s “Russian Asset” smears are to take out Jill Stein and Tulsi Gabbard, two prominent US political figures who’ve have come out strongly against the US Govt prosecution of my son, journalist Julian Assange, for revealing war crimes.

2 prominent US political figures who've have come out strongly against the US Govt prosecution of my son, journalist Julian Assange, for revealing war crimes.

This makes it amply clear that Tulsi Gabbard is standing up like a sore thumb for not just Hillary but everything she has stood for.

Meanwhile, US President Donald Trump called out Hillary Clinton for her attacks on Tulsi Gabbard and said:

So now Crooked Hillary is at it again! She is calling Congresswoman Tulsi Gabbard “a Russian favorite,” and Jill Stein “a Russian asset.” As you may have heard, I was called a big Russia lover also (actually, I do like Russian people. I like all people!). Hillary’s gone Crazy!

Tulsi Gabbard has maintained that Hillary is against her because she cannot ‘control’ her. We will see in the coming days, how much Tulsi is able to stand