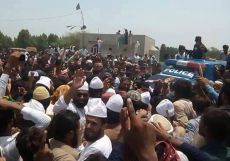 Sindh, July 27, 2016: Bharchundi Sharif, a Sufi establishment in the area is instigating Muslim mobsters to attack Pakistani Hindus. The second village to be attacked is the Mirpur Mathelo district Pano Aqil of the Sindh. The attack has been led from Sufi dargah, an institution that has led forced conversion of Hindu girls and […]