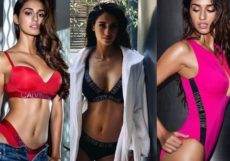 Disha Patani is looking super ravishing as she sashays and struts in bikinis of different hues. The Diva is known for her beauty and a killer figure and is one of the most glamorous actresses we have around today and she also continues to stay in news thanks to her ‘special friend’ Tiger Shroff. When […]

Tanushree Dutta was told by the director of her 2005 flick Chocolate to ‘take her clothes off and dance’ off camera in order to provide her co-star Irrfan Khan with ‘cues.’ Tanushree Dutta didn’t directly name the director but Chocolate was helmed by Vivek Agnihotri who has not responded to her allegations. She told DNA […]

Malavika Mohanan is an Indian film actress, who we can predominantly appear in Malayalam films. Malavika made her debut with Malayalam film Pattam Pole in 2013. There have been rumours that she was dating Sonam Kapoor’s brother actor Harshvardhan Kapoor. Actor Malavika is known for her Majid Majidi’s Beyond the Clouds. Malavika is the daughter […]

Saiyami Kher is the latest find of Bollywood. The actor made her debut along side Anil Kapoor’s son and Sonam and Rhea Kapoor’s brother Harshvardhan Kapoor in Mirzya and has been winning celebrity endorsement thanks to her natural poise and acting in front of the camera. Mirzya has failed to deliver at the box offce […]