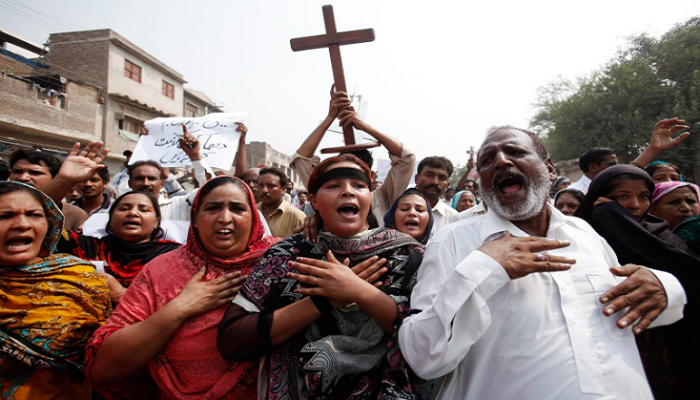 Christians and Hindus have emerged as the primary target of violence in Pakistan and now the Christian Colony in Peshawar has been targeted by the terrorists. What makes it even more troublesome is that it was a ‘suicide’ bomber attack on the colony although all four have been killed by the Pakistani forces.

Reports of one civilian being killed and 4 injured are also pouring in. This area is sensitive as it also has a military  installation, a Christian colony, and also a cadet college nearby.

In March of 2015, at least 14 people were killed and dozens wounded in bombings targeting two Churches in Lahore leading to a wave of fear in the Christian community.There are many such atrocities going on against the minorities by unchecked radical elements, but the government is failing to reign in these terrorists. Taliban associate Jamaat-ur-Ahrar has claimed the responsibility for the attack on the Christian colony. The terrorists attacked at around 6 am, but were spotted and eventually all of them were killed.

Christians have routinely been targeted by terrorists while they are also suffering under the draconian Blasphemy laws that end up applying only on the minorities and never on the majority. The attack on the Christian colony is the latest atrocity on the minorities which were earlier terrorized by the Sufi Pirs of the Bharchundi Sharif which led to the murder of one Hindu boy. A Hindu girl  Madhu was also carried away by the rioters during the violence and she has not yet been recovered.