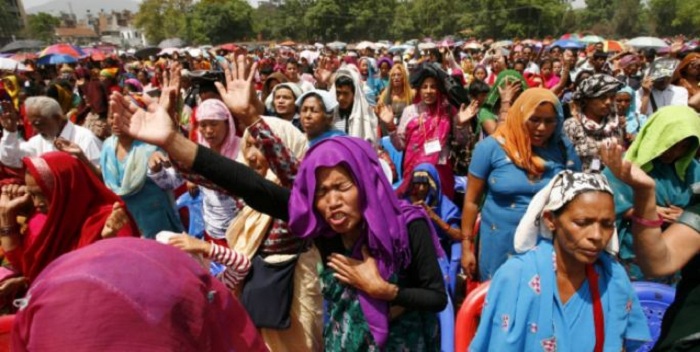 Nepal is undergoing rapid transformation due to rapid conversion to Christianity.

Senior politician Kamal Thapa, former Deputy Prime Minister of Nepal who has committed himself to re-establish the erstwhile Hindu State identity of Nepal, has warned.

Thapa, who is also the Rastriya Prajatantra Party Nepal chairperson, has also warned that the conversion efforts are going on unhindered and organized. He termed these conversion bids as a serious threat to Nepal’s cultural identity.

Kamal Thapa also said that conversion to Christianity will turn Hindus and Buddhists into minorities while engulfing Nepal into an unprecedented religious turmoil. He termed Nepal as the once ‘proud Hindu rastra (Hindu nation)’ and the motherland of Lord Buddha to highlight the importance if Nepal for both Hinduism and Buddhism.

Asking people to ‘wake up!’ he said that a million have been converted to Christianity in the last decade itself. He said that ‘ perhaps it is time to wake up!’

This is what he said on social media:

“Unhindered organized proselytization is a serious threat to Nepal’s cultural identity. Unchecked, this phenomenon will turn Hindus and Buddhists into minorities and could plunge this once proud Hindurastra n the motherland of Lord Buddha into unprecedented religious conflict.

More than a million have been converted into Christianity in the last decade. Perhaps it is time to wake up!”

The rapid conversions to Christianity have taken place after the severe earthquake that shook Nepal in 2015. The deadly 7.9 magnitude quake with epicenter at Gorkha district killed thousands, destroyed many monuments and made many homeless.