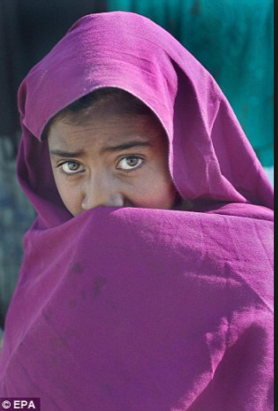 New York, March 10, 2016: Cases after cases are coming to light that throws light on the forced conversions post abductions of the minor Hindu girls in Pakistan. Joining this list is the Hindu girl Pooni who is aged about 13 years and has been converted and also ‘married’ a Muslim man.

Pooni is a Hindu minor girl and is the daughter of Sarang Kolhi who is the resident of village Qadir Bux Shar Taluka, Khipro District Sangar.

The Hindu community of Pakistan is saying that the minor girl was kidnapped by one Munwar Ali Bozdar and soon after he converted her, he contracted marriage as per the Islamic law.

Pooni was later produced before the Hyderabad High Court where the minor Hindu girl filed a petition against her parents and said that since she married as per her own wish hence her parent’s complaint against the abductor be quashed.

Her case is similar to many thousand minority girls who face similar predicament but rarely get justice. One of the most famous of the cases is the abduction and forced conversion of Hindu girl Rinkle Kumari whose case even reached US President Barack Obama. But even his pressure failed to get the Hindu girl back to his parents. Eventually, under the pressure of the local Muslim leaders, Rinkle Kumari’s family shifted out of Pakistan and took refuge in India.

Her case is similar to the many cases of the gross violation of human rights of the minority girls but these cases have not been addressed properly as many are scared to speak up against the politician-abductor nexus which is thriving in Pakistan.

Due to rising radicalization in Pakistan, the minorities like Hindus are fleeing to India and have cited religious persecution as the prime reason.

There are several Pakistani political commentators who have expressed their sadness on these abductions but little or nothing has been done in a country that does not even have a proper Hindu Marriage Bill and where Temples are being encroached upon.

Once a person, even if a minor is converted to Islam in Pakistan, he cannot reconvert back as then the person would be considered an apostate.