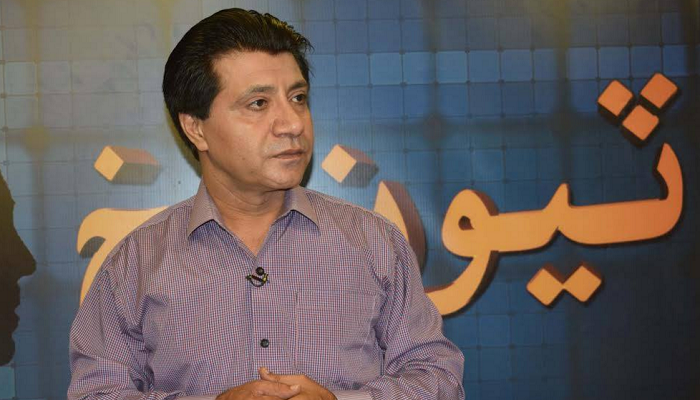 Asad Chandio is a journalist and a human rights activist based in Sindh, Pakistan. He has been the force that has exposed brutalities done against Pakistani Hindus by extremists and has often treaded on the path where even angels fear to tread in this nation. He is a secular dyed in the traditions of Sindh and is a Sindhi by blood. Here is an exclusive interview with one of the bravest men of Sindh.

Mr. Chandio, what is the situation of Sindh in Pakistan? In India, we keep hearing about the demand of Sindhudesh or the right of Sindhi people over the natural resources of Sindh. Are such talks something that you often encounter in Sindh?

The situation of Sindh in Pakistan is same as that of any other state which is forcibly occupied by another country in any part of the world.

In 1843, despite being an independent state, Sindh was made a slave due to the British Rule, but in 1947, rather than making Sindh as an Independent State, it was again handed over to a system where the people could not even talk about their rights and when they do, they are declared traitors…they demand their rights envisioned in the constitution of Pakistan.

Yes, in Sindh, there is ideologically political movement for creating Sindhudesh but it is alike dreaming for heaven as Mullahs do.

In Pakistan, Sindhis can be declared traitor when they raise the demands for their rights. Sindh and its Sindhis have become victims of countless injustices and are deprived of socio-economic, national, political rights. They are considered second-grade citizens in the country.

Where and exactly who is fighting for the Sindhudesh as per your opinion? Do you believe it can succeed? Or rather, do you think it should succeed?

There is no strong movement except chanting slogans which cannot be a real movement.

Practically, organizations following the ideology of GM Syed have withdrawn from demanding the separation of Sindh.

That’s why, there is neither a movement for demanding Sindhudesh nor even any movement is seen demanding rights of Sindh and Sindhis in Pakistan.

And, how does an average Sindhi person see India? Does it also see India as an enemy?

A majority of Sindhi people are not part of such mindset supported by the state and they do not see the Hindus and India as their enemy. But, the effect of such mindset of the state (anti-Hindu and anti-India) is increasing among the Sindhi people slowly and gradually. To enhance the influence of such a mindset, the state has given free-hand to religious organizations to work freely to spread hatred against India and Hindus in Sindh.

A lot of Baloch activists also speak about the ranger operations and army operations and the human rights violations in Sindh as well as Balochistan. How do you see that?

There is a severe violation of human rights in Balochistan and Sindh due to the operations being conducted by law-enforcement agencies.

Unfortunately, forced disappearances and other kinds of human rights violation in Sindh and Balochistan are not seen as the violation of the rule of law by either the government or by the law-enforcement agencies.

Any person or a political party who opposes the policies of government will be murdered, victimized, and he will be subjected to forced disappearance and the state will not even see it as the violation of human rights!

Do you find JSQM as a credible voice for the Sindhudesh? Many of its activists got abducted and killed.

Many activists of JSQM believe in their ideology and because of this, they are being abducted and victimized but after the death of Bashir Khan Qureshi in 2012, practically JSQM has become a non-functional party and has also limited its activities in Sindh.

How do you see the ruling Bhutto-Zardari dominated PPP, it claims to be secular but had Mian Mitho in its ranks when Rinkle Kumari was forced to convert? Has it done anything for the interior Sindh in terms of development or anything to protect the minorities in Sindh?

PPP did not remain secular as its founder Zulfiqar Ali Bhutto put the base of its party on Islamic socialism since its founding.

After his death, and now under the leadership of Asif Ali Zardari, it has become another Islamic party and it has nothing to do with secularism.

A majority of Sindhi Hindus are being victimized by the feudal lords and parliamentarians including Mian Mithu of Bharchundi and they remained the active members of PPP and some have strong affiliations with PPP. In Sindh and Pakistan, there is no party that will do anything practical to protect the Hindus, Sikhs, Christians, Ahmadis, and others.

So you don’t believe Pakistani politicians want a secular Pakistan at all!

Honestly, there is not a single political party which could even talk about making the country a secular state, forget about doing anything practical to make it a secular state. Interestingly, the oath that a Parliamentarian takes here is to be loyal in following Islamic ideology rather than to be loyal the people of Pakistan or to the Constitution of Pakistan!

In the recent incident of desecration of Holy Quran, the Pirs of Bharchundi targeted Hindus. Then, we came to know that the desecration was done by a mentally-challenged Muslim. Why this hate against the Hindus who are hardly a few lakh now?

The state of Pakistan is not based on the rights of people but on the basis of hate against Hindus and the incident of Ghotki is also the part of such ideology to get their desired results.  Such mindset supported by the state wants Hindus to leave Sindh and the country because every Hindu in Pakistan is deemed as a citizen of India not Pakistan. Pakistan sees India as the enemy of Pakistan and in the same way, the Hindus living in the country are deemed as enemies.

Hmm. There are reports that we covered where the Hindu and Christian girls and boys are abducted, forcefully converted, raped and then they vanish and are not allowed to meet or see their ‘Hindu’ or ‘Christian’ relatives. What happens to them? And who is behind these activities? Do these criminals have political parties behind them?

Yes, abducting and converting Hindu girls and making them Muslims forcibly and marrying them to Muslims are not seen as a crime but it is considered as a holy job and somewhere it is considered like worshiping.

Because of this, every stakeholder including politicians, religious extremists, local influentials and criminal elements of society are seen supporting such activities like forced conversion because they think it is holy work. Kidnappers see abducted girls as their Islamic property and after the forced conversions it is they who would decide her fate. Whatever they want to do with her, they do, and they also put a stop to any relations these converted girls have with their parents.

Why do you think that Sindhi Hindus did not leave for India in 1947 when the country got divided? This question is important as now the Hindu exodus has many people in India wondering about it.

Sindh was and is the homeland of Sindhi Hindus and why should they leave it?

That’s why, during partition in 1947, Sindhi Hindu did not want to leave Sindh because it was their homeland as it was considered as the partition of two countries, not Sindh.

The migrations of Sindhi Hindus started from Sindh, when the Mohajirs (Refugees) with strong religious hatred against Hindus came from UP, Bihar and others areas of India in Sindh. These Mohajirs (Refugees) started to persecute and murder Sindhi Hindus and to forcibly occupy their properties like shops, homes, and lands in Nawabshah, Hyderabad, and Karachi . After such situation, Sindhi Hindus living in the urban areas of Sindh were compelled to migrate to India. Recently, the same communal mindset has further been spread in the country and it sees the Sindhi Hindus as their enemy.

You are a secular voice in Pakistan, don’t you think that you must extend your reach as Pakistan is now in the grip of extremism? Maybe join politics besides doing journalism?

Not only we have taken efforts to save the Sindhi Hindu against religious persecution but also drew the attention of many politicians and political parties toward those issues.

Politics is not my field and I am a journalist and taking all efforts for the cause of Sindhi Hindus. However, politics has become an expensive job and I can not afford to do it.

The last question, any plans of coming to India, especially because many Sindhis live here?

Whoever raises the voice against persecutions of Sindhi Hindus is deemed as an Indian Agent because all Hindus here are considered as the ‘citizens of India.’

So my friends are strictly suggesting me not to visit the India because once I would dare visit India, I would be declared an agent of India. It would be a big challenge and a risk for me to visit India under such circumstances. But despite all this, I wish to visit the brethren neighboring country because it has same history and culture there as we have.