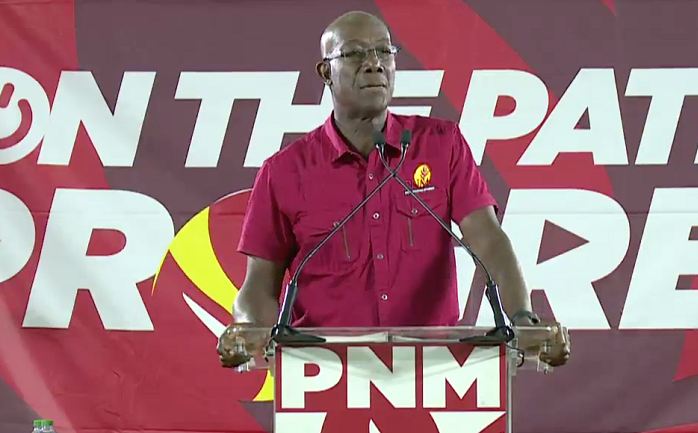 Prime Minister Dr Keith Rowley issued an unreserved apology to the Hindu community for any hurt caused by a saree disrobing skit performed at the PNM’s recent sports and family day. The apology came after several Hindu and women groups took umbrage and a backlash ensued. The apology was tendered on August 19th 2018.

Dr Rowley was speaking tonight at a political meeting in Malabar when he said:

“I took umbrage when political opponents accused us of rape and violating women and glorifying violence against women because I did not understand the significance of the yellow sari and the insult that could be to persons for who that is a deep spiritual entity.”

Prime Minister Rowley said the last week has been a learning experience for him.

“I took the opportunity to consult with the Hindu leadership and that is when I realized how deeply hurt and offended they were by what we thought was simply a portrayal of one constituency.”

He added: “We have no difficulty and there is no shame in apologizing to the Hindu community and what it says to us, is that to avoid this, we need to educate our people and our children.

“We ought to know more about each other. If nothing else happens out of this it brings us to a place in this nation where we should have a better resolve to carry a better conversation between the different components of this country.”

Prime Minister Keith Rowley’s apology to the Hindu community was appreciated by Hindu leaders but Pundit Satyanand Maharaj felt that it must be copied by all PNMites including party social media activists.

National Security Stuart Young had earlier angered the community by saying that saree disrobing skit was just ‘a bit of fun’ but on August 19th, 2018 he too apologized and said:

I would like to apologise to the Hindu community for the insensitivity of the skit, which I was completely unaware had serious religious connotations and was disrespectful to the Hindu community. I admit that I am not versed in Hindu scripture and I was not aware of the story of the Draupadi from the Mahabharata.

I hereby offer my sincere and unreserved apology to any and all who were offended by the said skit, in particular to the Hindu community, and also for my description of the skit as a “little bit of fun” when confronted at a media conference the day after the skit was performed.