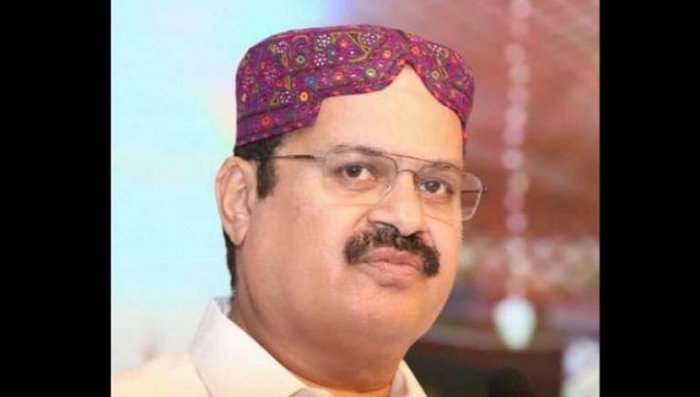 Dr. Mahesh Malani of the Pakistan Peoples Party’s (PPP) has become the first Hindu candidate to win a National Assembly seat, 16 years after non-Muslims got the right to vote and contest on general seats in the country.

He received 1,06,630 votes while his opponent, Arbab Zakaullah of the Grand Democratic Alliance, garnered 87,251 votes.

Mahesh Malani, a Pakistani Hindu Rajasthani Pushkarna Brahmin politician, was a member of parliament from 2003-08 on a reserved seat, nominated by the PPP.

In 2013, Malani became the first non-Muslim Member of the Sindh Provincial Assembly after winning the Tharparkar-III general seat of the Sindh Assembly.

He had served as the chairperson of the Sindh Assembly’s Standing Committee on Food, apart from being members of various standing committees during the last government’s tenure.

Dr. Mahesh Malani is very popular in among all voters of Tharparkar dist, irrespective of any caste, religion, community, region or affiliation. He has done many works for the development of the region in the field of Healthcare, Education, Employment, Roads, Drinking water, Sanitation etc. Dr. Mahesh Malani’s and Tharparkar region name is associated with development all over Sindh. He is called as Development Man and Tharparkar as a model constituency. District Hospital Mithi has heavy OPD rush from other districts also. Mithi college students shine in pre-medical and pre-engineering exams in State.

Mahesh Malani is native of Mithi town of Tharparkar District. He is a Medical doctor by profession and alumni of Liaquat Medical college Jamshoro Sindh. During his social visit to India in 2015, LMC Alumni Association and Thari Samaj have arranged a meeting with him.

LMC Alumni Association India President Dr. Nandlal Harani told that there is an atmosphere of joy and happiness among all doctor friends and they have congratulated to Dr. Mahesh Malani and his elder brother Ranomal for this great victory. Thari Samaj India President Mahadev Kojhrajmal informed that all Thari Samaj families are overjoyed to hear the good news of winning in National Assembly. He further said that blessings of Hardas Bhagat will be on all Thar Samaj and congratulated Bhagat Maturam, Malani family and all voters of Tharparkar on this occasion.

Malani family entry in politics started with his father Mahadev Malani, who was a member of the local town committee. Main person was his brother Late  Amar Jagdish Malani, who had worked with PPP Leader and former Prime Minister Benazir Bhutto. His other brothers were also closely associated with PPP.

Non-Muslims got the right to vote and contest on general seats of the parliament and provincial assemblies in 2002 after the then president Gen (retd) Pervez Musharraf made amendments in the Constitution.

They also have reserved seats in the Senate, national and provincial assemblies.

Ten seats are reserved for minorities in the National Assembly, which are allotted to parties on the basis of the number of seats they have in the parliament.

Women and non-Muslims in Pakistan get two opportunities to become a lawmaker: first by contesting elections on 272 general seats from anywhere and after getting the nomination from a party having representation in the National Assembly.

Dr. Mahesh Malani relatives live in Khairthal Rajasthan and Ahmedabad Gujarat. They are very happy and distributed the sweets, once they heard the news of the historic win. They wish him many more successes in the future.

March this year, PPP’s Krishna Kumari from Tharparkar became the first Hindu woman to be elected to the Senate. She was elected to a reserved seat for women from Sindh.

The article submitted by Dr. Nandlal Harani, President, LMC Doctors Alumni Association. The views submitted are his own.