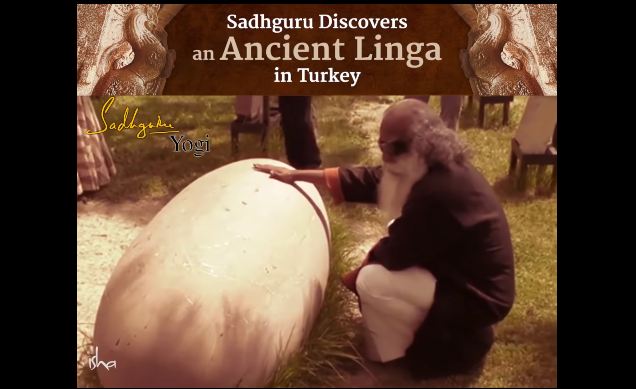 Hindu Guru Sadhguru discovered an ancient Shivalinga in Turkey which is nearly 5-feet tall. Sadhguru also said that the whole of Europe once had Temples like the ruins of the one he discovered in Turkey. He made the discovery when he was at the Rumi’s mausoleum in Konya, Turkey a while ago.

He explained that the Shivalinga he discovered was consecrated 4700 years ago and despite the time span it was still ‘alive’.

The discovered Shivalingam, cracked and abandoned, now rests in a garden.

Sadhguru was told that there was a Temple some 4700 years ago, a full-fledged functional Temple, where this Shivalingam was worshipped. The Shivalingam evoked Sadhguru’s curiosity and he demonstrated to a few people that how every point on the Linga is different. He used Rudraksha for this demonstration. You can watch the video below:

He also explained how Temples must operate stressing that the idea was to absorb energy from the sacred place.

He also said that the whole of Arabia and Europe were full of such spaces but now they stand destroyed.

Turkey is a Muslim majority country with nearly 98.6% population adhering to Islam.

Prime Minister Of This Country Apologized to Hindus. Know Why?