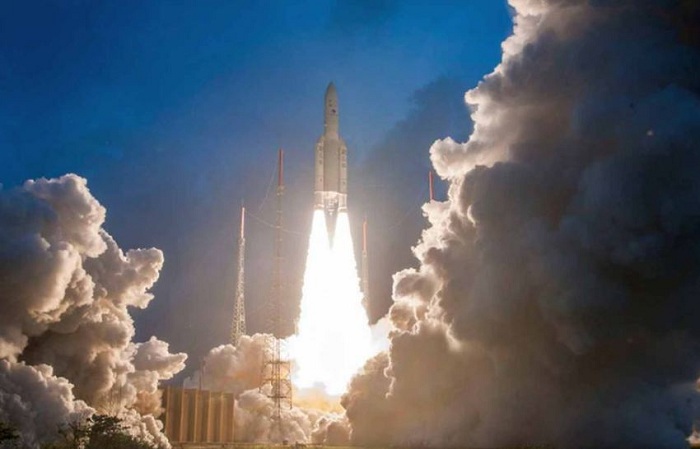 The launch vehicle Ariane 5 VA-246 lifted off from Kourou Launch Base, French Guiana at 02:07 am (IST) carrying India’s GSAT-11 and South Korea’s GEO-KOMPSAT-2A satellites, as scheduled. Ariane 5 is one of three launch vehicles operated by Arianespace along with Soyuz and Vega.

After a 30-min flight, GSAT-11 separated from the Ariane 5 upper stage in an elliptical Geosynchronous Transfer Orbit. The achieved orbit was very close to the intended one.

The 5,854-kg GSAT-11 will provide high data rate connectivity to users of Indian mainland and islands through 32 user beams in Ku-band and 8 hub beams in Ka-band.

“GSAT-11 will boost the broadband connectivity to rural and inaccessible Gram Panchayats in the country coming under the Bharat Net Project, which is part of Digital India Programme,” ISRO Chairman Dr K Sivan said.

The Bharat Net Project aims to enhance the public welfare schemes like e-banking, e-health, e-governance among others.

He said GSAT-11 will act as a forerunner to all future high throughput communication satellites. “Today’s successful mission has boosted the confidence of the entire team,” Dr Sivan added.

Post-separation, ISRO’s Master Control Facility at Hassan in Karnataka took over the command and control of GSAT-11 and found its health parameters normal.

The scientists will undertake phase-wise orbit-raising manoeuvres in the days ahead to place the satellite in the Geostationary Orbit (36,000 km above the equator) using its on-board propulsion systems. GSAT-11 will be positioned at 74-degree east longitude in the geostationary orbit.

Subsequently, the two solar arrays and four antenna reflectors of GSAT-11 will be deployed in orbit. The satellite will be operational after the successful completion of all in-orbit tests.

“A major milestone for our space programme, which will transform the lives of crores of Indians by connecting remote areas! Congrats to ISRO for the successful launch of GSAT-11, which is the heaviest, largest and most-advanced high throughput communication satellite of India.

India is proud of our scientists, who keep innovating and setting high standards of scale, achievements and success. Their remarkable work inspires every Indian,” the Prime Minister said.

Nano drones in India to start flying legally from today