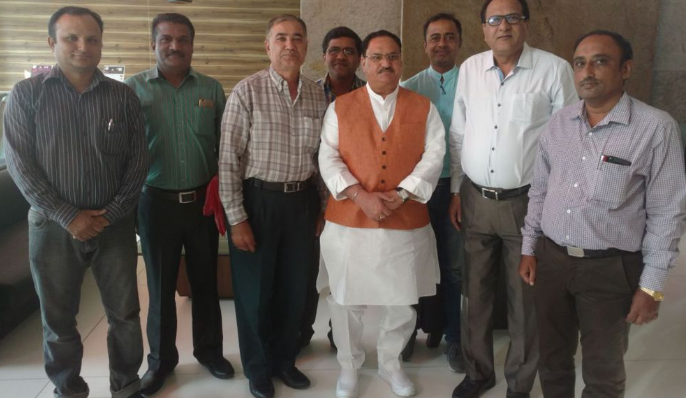 In Ahmedabad, November 2017, a delegation of migrant Pak Hindu Doctors held a detailed meeting with Jagat Prakash Nadda, the Union Minister of Health & Family Welfare, Govt. of India during his Gujarat visit.

The Pak Hindu doctors had requested him to consider their pending request for conversion of temporary MCI registration into a permanent one, after completion of 8-10-year practice in India, as per the MCI norms.

The Minister had then replied that the matter is under consideration with a different department in the Ministry. He also recalled migrant doctors meeting him at his office along with Dilip bhai Pandya M.P. (Rajya Sabha). He assured the doctors that the file has been put on most urgent consideration, as many Ministers and MPs have personally recommended the solution on humanitarian ground.

Due to the disturbed political conditions for Hindus in Pakistan, many families have migrated for permanent settlement in India. Amongst these, many qualified professionals like Doctors, Engineers, Academicians, Chartered Accountants, Lawyers, Pharmacists, Management graduates and other professionals have migrated to India due to persecution, forced conversion, religious intolerance & unsafe conditions for family residence.

Pakistan: Hindu reporter told to drink from a separate glass

These professionals were well settled and earning handsomely. They were well placed in their respective organizations or some even in Govt. jobs. They have to quit their career mid-way and forced to migrate to India for saving their religion and families. Many Hindu women doctors have also migrated to India from Pakistan. Presently there are 150 doctors are residing and working in Gujarat & about 250-300 migrant Pak Hindu doctors are working all over India.

Among these Hindu professionals, majority doctors from Pakistan are well qualified and are registered with Pakistan Medical and Dental Council Islamabad. They all have passed the MBBS from recognized and well known medical colleges. These doctors had been practicing in Pakistan for 10-20 years. These doctors hold MBBS degrees, are recognized by Medical Council of India and included in schedule Three part II of IMC Act,1956. 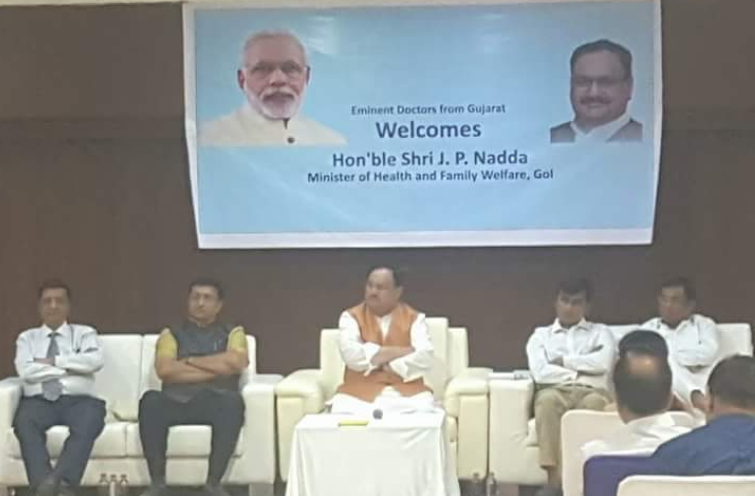 Migrant doctors had also worked and served in India, as qualified doctors, for 8-10 years after getting the temporary registration of MCI, during the Long Term Visa period of stay in India. These migrant Hindu Doctors are not fresh Medical Graduates. As per PMO advice and Union cabinet decision MHA Govt. of India issued notification F.No.25022/50/2015-F.1 dt.7th Sep. 2015 for relaxation of residential conditions for Hindu Migrants rehabilitation in India.

Pakistan: In what kind of jobs do the non-Muslims get preference?

The migrant doctors who have got Indian citizenship recently, face problem of registration. When they were foreigners, they get temporary registration to work in India. But when they get Indian Citizenship, they cannot practice, until they pass the screening test, which is mandatory for fresh graduates.

Hindu doctors migrated from Pakistan registration issue different from those Indian doctors who have graduated from Russia and other foreign countries. Indian graduates of foreign countries doctors cannot practice in India unless he/she passes FMGE (Foreign Medical Graduate Examination) popularly known as the screening test. But migrant Hindu Doctors from Pakistan are not fresh graduates. They work in India for 8-10 years on temporary registration granted by MCI in India. These migrant Hindu doctors have all required local knowledge and skills to work in India. Apart from this, they had been working in Pakistan in reputed medical institutions on a senior level.

That PERMANENT MCI Registration will help these doctors to earn their livelihood and feed their families on one hand and serving the patients in society on another hand. That way they will not become a burden on Govt. but contribute to the development of society.The Pak Hindu Doctors are again requesting the Minister of Health and Family Welfare Govt. of India to convert to permanent  MCI registration from temporary for migrant Hindu doctors, who have got Indian citizenship. These migrant Pak Hindu doctors should be exempted from screening test, considering their registration and long professional experience in Pakistan and India

This rehabilitation of migrant Doctors will help them integrate into mainstream society and serve the country more efficiently.

The following article has been submitted to www.currentriggers.com by Sindh Minority Migrant Association group and only minor editing has been done for convenient reading.