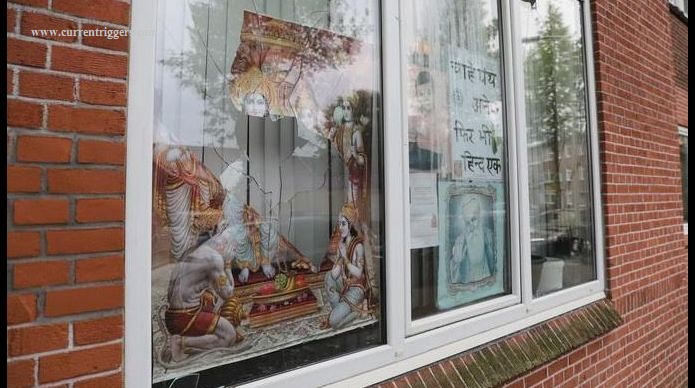 The Netherlands is a first world country and naturally, the rest of the world looks up to it when it comes to upholding human rights even in the most trying circumstances.

But is this always the case?

I dare say that this is, unfortunately, not the case. Because the Netherlands failed to give justice to the Hindus who have been under attack for the last 30 years.

Most of you must have read the report that came out in May last year when the Netherland citizens, the Moroccan Muslim zealots, smashed the windows of the Ram Mandir Hindu temple in The Hague repeatedly. Temple President Attry Ramdhani was stated as saying that he ‘believed Muslim youth had carried out the attack during Ramadan because they wanted to drive the temple away from the predominantly ‘Muslim Schilderswijk neighborhood.’

But does the above coverage capture the grievances of the Netherlands Hindus?

Was the last year’s incident the ‘only’ incident that victimized the Hindu community? And was it just about one-off ‘vandalism’ as has been told to us?

If I say that this is untrue, most of you would be stunned But this is exactly the problem; when reporting one incident we sometimes fail to go in the depth and as a result, the issue truly never gets resolved.

Let me take you back some 30 years ago when this all started. The desecrated Ram Temple is not a new property; it is somewhere 35 years old. And as we dug deeper we found that for some 30 years it has actually continuously being targeted with many despicable acts. A source, who spoke at length to me, explained that only the first 5 years after the Temple came into being were what we can say ‘peaceful,’ the rest of the times, the Temple’s integrity, as well as the Hindu community’s respect was constantly being violated. Like when Hindus from different places would gather around for doing havans in the Temple’s garden. The Moroccan Muslim youth would hurl bottles and pelt stones. This is when some 150-200 Hindus, including elderly women and children, would also be present for the havan. Hindu women, elderly included, were often accosted and robbed of the jewelry right outside the Temple.

On inquiring further, I was told that not only did the desecration of the Hindu Temple took place,  but when these criminals were confronted during Ramazan (Muslim fasting month), they used to boast  that it was the month of Ramazan hence, ‘we can do anything; we can kill or break and Allah will  forgive everything.’

What made it worse for the Hindus was that when they sought peaceful resolution and justice, all they got were accusations in return. During the interfaith meeting last year, when the Hindus raised the issue, they were instead schooled that they were actually accusing another community and judging them. Some claimed that Muslims were being ‘blamed’ and ‘belittled’ by the Hindus for raising the issue of desecration and for quoting the Muslim youth on their Ramazan boast.

In fact, the gathered people told the Hindus that it is not desecration but ‘vandalism’ and that no one should connect any religion to the acts of ‘vandalism.’ In short, squarely putting all the blame on the aggrieved party without checking on the Moroccan youth. Perhaps, these people wanted Hindus to keep their mouths shut and pretend that nothing happened as ‘Islamophobia’ is a big challenge in many parts of the world. But the fact that the ‘Hinduphobic’ attitude of the Muslim Moroccan youth was not a worry for them is nothing short of duplicitous and smacks of disdain for the human rights of a peaceful minority community who only wanted to do havans without being attacked with stones or bottles.

Different Mayors of The Hague came and went, but none, despite being approached could gather enough strength to put an end to the mess. Only after Hindus went to the press in 2018, was the Hindu Temple given the surveillance cameras.

Till the surveillance camera did not get installed, the harassment of Hindus did not stop.

Due to repeated attacks on the Temple and lack of a patient and a compassionate hearing, many Temple goers started debating whether this 35-year-old Temple needs to get relocated to another place.

But many were determined enough to keep the Temple standing at the original place and it is still standing there.

However, there is a silver lining in these unfortunate circumstances too.

Repeated harassment brought the Hindu youth out of their homes and often they would guard the temple at night so that the Moroccans won’t desecrate the Temple. This guarding stopped after the camera got installed.

When Hindu community decided to protest, the young Hindu bikers confirmed that they will join the protest against the repeated attacks but since the Mayor Pauline Krikke refused permission for the protest of the Hindus citing law and order issues, it was shelved.

Lack of compassionate hearing sans the sermons or misgivings could have helped and the criminal elements would have gotten the message but this too was denied to the Hindus of Netherlands.

So far, we can say that some peace has returned to this Temple, but it is, as you can imagine, a rather uneasy one. And the fault definitely lies with the lack of spine in the people in power.

The Big Question: Was it the tale of Ram Temple only?

Obviously, most would believe that only one Temple was targeted. But nothing can be farther than the truth. There is also a Krishna Temple, just 2 km away from the Ram Temple and the situation was equally worse. In front of the Krishna Temple’s front door, Moroccan youth used to do barbeque and when resisted then they would become violent.

Why would anyone do it? Any rational person will wonder. To antagonize and demean the Hindus of Netherlands seems to be the sole reason. And these criminal elements were unstoppable.

So much so, that after initial resistance Hindus started feeling afraid for their safety and did not speak out. Even politicians who are of Indian origin have failed to denounce these repeated desecrations and violations of human and religious rights of the Hindu community. Barring occasional solidarity and sorry messages nothing concrete was ever done by them.

So, whenever Muslims came to pray in this hall, the paintings and statue get covered, even the Christian symbols get covered for the Muslims.

But the holy Ganesha statue was attacked and broken three times. Three times the statue was replaced and for some time the hospital did not keep another statue fearing another attack. Is that fair that these reports don’t make it to the newspapers?

Now comes the big question: Why did all this not come under hate crimes or Hinduphobia?

The circle of ensuring silence when it comes to the victim community is nothing short of treachery to the principles of human rights that the Netherlands and the people of this country believe in.

Yet, it seems that the very ideas and principle that created the robust image of the Netherlands is also, now, its biggest challenge. So enamored are the law enforcers with the ‘projected image’ of Netherland, that to keep it shining they are, sorry to say, unable to see the persecution that has been happening right under their nose.

It is not my case, that Netherlands is a racist, bigoted, or a violent country; anyone who has had any friends in the country will vouch for their welcoming and generous nature. I pretty well remember how well the extra security was provided to the mosques in the Netherlands after the shootings in New Zealand Mosque. It is absolutely commendable that the Netherlands took steps in the wake of the bloodbath. And yet, it made the cardinal mistake of ignoring persecution within the home.

The Netherlands loves its image but it needs to remember that no country can actually cultivate the image that is enjoyed by the Netherlands if it were not for the citizens of the country. Allowing a set of the minority to keep humiliating another one is not going to help the Netherlands one bit because what happened with the Hindus can very well happen to others too and it will snowball into a much bigger problem sooner or later.

But yes, in all this, Hindu community of Netherlands must be lauded, that despite provocations, it acted responsibly and peacefully. Let’s hope this circle of persecution ends here and better sense prevails among the Moroccan Muslim youth.

A Prime Minister apologizes to the Hindus, sets a benchmark

P.S.: What many do not know is that the Prime Minister of Netherlands Mark Rutte was in India when the news story surfaced on the Ram temple vandalism.

We have requested a quote from the Ministry of Justice and Security of the Netherlands with regards to the arrest of the people responsible for the attack on the Ram Temple. We will furnish once they reply.