Afghan Hindus and Sikhs continue to live in fear in Afghanistan.

A letter issued in Pashto by the Islamic State of Khorasan has issued a threat to the Afghan Hindus and Sikhs and told them to pay Jizya.

The letter also says that if the Afghan Hindus and the Sikhs fail to pay up the Jizya then they must be ready to face the consequences.

Afghan Hindus and Sikhs have been told to get in touch with a man ‘Khaled’ for details on the amount they will have to pay in case they wish to live alive.

Recently, the last remains of Afghan Hindus and Sikhs, who were killed in Jalalabad, eastern Nangarhar province of Afghanistan, were brought to India.

Fagirchand Chandihok, based in Germany but with roots in the country strongly condemned such barbaric letter and felt that this reveals that Kabul Regime has failed and lacks teeth to protect the minority Afghan Hindus and Sikhs. He is firm that the only option left for the community is to leave this country. 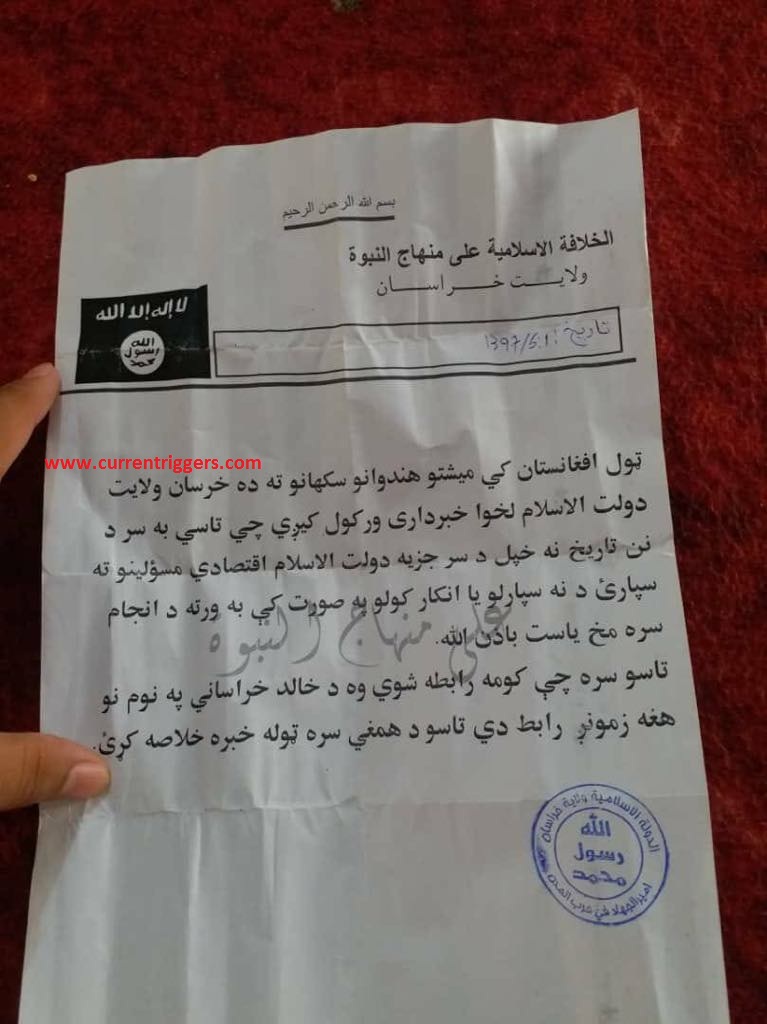 However, it is not easy for the Afghan Hindus and Sikhs to migrate.

Many have taken refuge in India under dire circumstances, but several have been forced back due to lack of emotional and financial support in India. Due to slow process of citizenship, the community is often forced back to Afghanistan.

An Afghan Sikh on the condition of anonymity explained his predicament and why he has to continuously go back to Afghanistan after incurring a loss in the business. Later, he was forced to take up a job of Rs. 10, 000 but it was insufficient to support him and his family back in Afghanistan.

When asked if the Afghan Sikhs faced any other issues besides this, he was clear that just a little cushion of financial aid was enough to help them in India but they rarely got any help.

Trinidad and Tobago: Hindus hurt by the vulgar video

An Afghan Hindu concurs with Chandihok that Afghan government is failing to protect the peaceful minority. The Afghan Hindu, in written replies, also said that at this time almost 250-260 families of Hindu-Sikh community are living in Afghanistan which would be nearly 1400-1500 persons in different states. Not having a decent education is also a major impediment for this industrious community.

The Afghan Hindus also fear kidnapping and forceful religion conversions if one gets caught by militants. If the person refuses to convert to Islam, then they are killed.

Indian government including several foreign governments have expressed sorrow over the brutal murders that have led to mass exodus of the once prosperous Afghan Hindu, and Sikh community.

Perhaps, it is time to move beyond the talk and provide them with a safe place to live.