New Delhi, February 18, 2022: Rubina Dilaik is one of the most notable actors in the TV industry. She is also the winner of the reality show Big boss 14 and is widely known for bold outings in fashion. Rubina Dilaik is best known for having played the lead role in Shakti: Astitiva Ke Ehsaas […]

New Delhi, February 17, 2022: TV actor Tina Datta has been keeping her fans hooked on her social media with her extremely gorgeous clicks. Her tasteful and yet sensuous pictures make her a hot favourite of her fans. Tina Datta is best known for playing the lovely Ichcha in the Colors Tv show ‘Uttaran’. Later […]

New Delhi, January 14, 2022: Actor Tejasswi Prakash is busy keeping her fans motivated with her stint in the Bigg Boss house. Her equation with fellow actor Karan Kundrra has been much talked about. While the relationship seems rocky and had too many ups and downs, we truly think that Tejasswi and Karan would both […]

New Delhi, June 5, 2021: Netflix seems to be continuing with the upcoming hosting of anime series “Record of Ragnarok” (reportedly releasing globally on June 17), despite Hindu protest expressing it as “highly inappropriate” for trivializing immensely revered Hindu deity Lord Shiva. In an email to distinguished Hindu statesman Rajan Zed, who spearheaded the protest, […]

New Delhi, June 1, 2021: Let’s say it! People walking their pets never bother to clean up after their animals are done. And Rohit Roy and Ronit Roy are literally the first of our celebs to be voicing against such irresponsible behavior of such pet owners. In a tweet Rohit Bose Roy tweeted: All our dear […]

New Delhi, April 9, 2021: Men have it so hard these days as proven by Nia Sharma! TV actor Nia Sharma was asked a question on her Instagram during ‘Ask Me Anything about her boyfriend. ‘Tell something about your bf’ asked a fan to which Nia replied: “He lies all the time saying I look […] 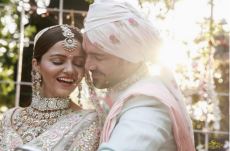 New Delhi, February 9, 2021: Kasam actor is rooting for Rubina Dilaik and called Jasmin Bhasin ‘real-life’ naagin in a series of tweets even as Abhinav Shukla is rumoured to have been eliminated from the show. In the earlier tweet, the actor wondered why Jasmin Bhasin did not consider emotions of Rakhi Sawant when she […]

New Delhi, January 10, 2021: Rubina Dilaik and husband Abhinav Shukla are some of the strongest contestants of Bigg Boss 14, and fellow actor Devoleena Bhattacharjee is rooting for them to take the trophy home. In a tweet, Devoleena also spoke encouragingly that the wife-husband have sorted out their differences in the Bigg Boss house […]

New Delhi, December 30, 2020: TV actor Devoleena Bhattacharjee spoke out against the ‘insensitive’ stance of Bigg Boss 14 contestant Jasmin Bhasin. In the previous episode of Bigg Boss 14, Jasmin Bhasin put a huge thermocol mask on Rakhi Sawant’s face while she was seated at the dining table talking to Aly Goni. The mask […]