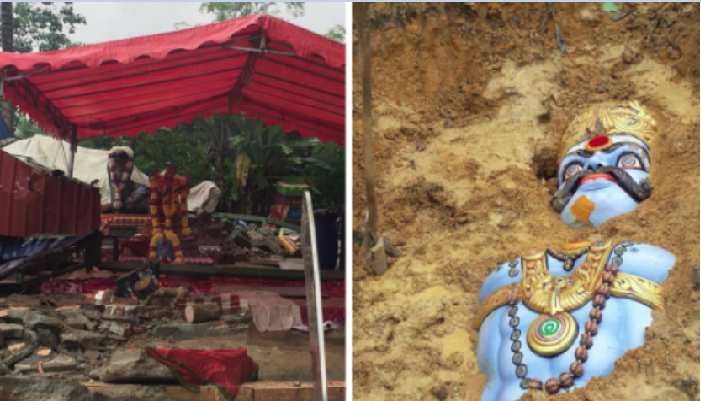 Penang Deputy Chief Minister Prof. Dr.Ramasamy took to social media to denounce the demolition of Hindu Temple in Johor, Malaysia that has sparked a major row.

Calling the Hindu Temple demolition in Johor a mockery of constitutional safeguards he said that the destruction of places of worship is an affront to the decency and well being of Malaysians. Here is the full statement of the leader:

“No places of worship whether they are illegal or not should not be subjected to demolition that strikes at the heart of the religious and spiritual identity of Malaysians.

Temple desecrated and vandalized by miscreants in Manipur

The recent demolition of a Hindu Temple that took place in Seri Alam, Masai, Johor shows that there are forces at work to undermine the fundamental provisions of the nation’s constitution that safeguard religious freedom.

I hardly expected Temple demolitions to take place in the state of Johor, state that has better race and religious relations among different ethnic groups than the other states. In this regard, at least in recent years, Johore royalty and in particular the Sultan has taken proactive measures to keep the state free from religious and racial extremism.

This is the reason why I was surprised to hear about the demolition of a 80-year old Hindu Temple, Sri Sakthi Sri Sinna Karuppar Alayam, on January 11, 2018, in Seri Alam, Masai, Johor.

The demolition that took place was something drastic and extreme with the assistance provided by more than 300 policemen and members of the federal reserve unit. The combined effect of the demolition exercise was total–the main deities and the Temple itself were destroyed beyond recognition. A more than 50 year old mango tree was saved simply because of its size and the inability of the bulldozers to uprooted it.

I understand that the Temple committee was taken by surprise by the demolition itself.

In some earlier communications with the land owner who is foreign national, the Temple committee asked for piece of land on which the Temple was situated. But then there were no news forthcoming from the land owner except for the sudden turn of events leading to demolition.

In fact, the demolition squad moved in with the assistance of the police without the knowledge of the devotes. Once they moved in, they locked the gate to prevent Hindus from the vicinity from moving in.

It is believed that the land owner took a court order for the eviction of the Temple occupants last year, but it only enforced during the demolition exercise. Under normal circumstances, even if the Temple is illegal, and if the land is situated in an urban area, the land owner not only has to obtain the eviction order but also the demolition permit from the local authorities.

However, eviction order itself does not permit the owner to demolish buildings or any other structures. The police might have been roped in on the basis of the eviction order, but I am not sure whether the land owner obtained the permission of the local authorities in going for demolition.

Moreover, developers and land owners in Penang understand that demolishing a place of worship is not a simple legal matter, it is a complicated process. Thus, no developer wishing to develop a land on which there is place of worship would want to antagonise the standing government by going for demolition. It is simply not worth it.

The Menteri Besar of Johor Mohammed Khaled Nordin issued a statement after the demolition saying that he regretted the action of the developer. He also said that the state government offered an alternative piece of land that was rejected by the Temple committee.

However, upon verification, it was found that there was no such offer from the state government. Given the fact, that the Temple-site is on a 200-acre land, I don’t see why the state has to offer land for moving the Temple without in the first instance asking the landowner to provide the land.

A day after the demolition, apparently the Johor MIC leaders visited the Temple site and promised the Temple committee especially its advisor by the name of Sasidaran that they would ensure that the Temple gets ownership of the existing land.

Whether this is the promise to contain the MIC’s political fallout from the demolition or whether it is genuine remains to be seen. However, given the past empty promises of the MIC on matters concerning the Indian community, those who were gathered at the Temple site are not confident that the MIC would be able to deliver what was promised the day after demolition.

While the devotees might have been caught unaware of the impending demolition of the Temple, I am not sure why the members of the Johore state government particularly the state MIC leaders including its exco member were not in the know. Was this an oversight of the MIC that claims to be the “champion” of Indians or was it that the MIC given its total subservience to Umno leaders pretended to be ignorant of the incident.

If the Johor MIC leaders had been proactive in representing the Indian community, I think that the Temple demolition could have been averted. But alas, given their subservience ways, the entire party has come to a historical juncture that it cannot represent the Indian community effectively anymore.

The MIC leaders being reliant on Umno for political and career opportunities, have betrayed the Indian community to the extent that their places of worship cannot be safeguarded anymore. What a shame!

I am proud that young and talented assembly person Liow Cai Tung was there for two days after the demolition to give her helping hand to the devotees and the Temple committee.

In her statement, she took the Menteri Besar Khaled for task for not being able to safe the Temple on humanitarian grounds.

Similarly, my long time friend (from the days of Insan), PKR’s state chairman, Hassan Karim visited the Temple site and spoke as to why a negotiated settlement could not be found to save the Temple from destruction.

The support shown by PH leaders of different ethnic and religious background showed that what happened was not a mere Hindu Temple destruction, but a larger issue of ethnic and racial discrimination that is taking place the BN administration.

Malaysia: A Hindu mother’s phenomenal fight to save her children

The PH leaders drove home the point that Temple destruction under the BN administration showed that the coalition has reached a point that it cannot ensure the constitutional protection of the basic fundamental rights of its citizens.”