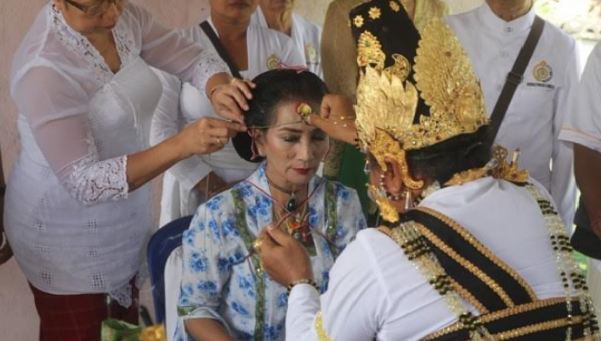 Kanjeng Raden Ayu Mahindrani Kooswidyanthi Paramasi is the Princess of Java, Indonesia, who is known for her love for music and is also an avid pianist and composer.

The Princess of Java went through a Sudhi Wadani Ritual on July 17, 2017, in the Pura Luhur Catur Kanda Pat Sari of Bali. This ritual can be described as an initiation into Hinduism, one of the major minority religions which are seeing a major boost as many are returning to its fold, attracted by its philosophy.

It began with the purification ritual, followed by the priest chanting the second stanza of the Puja Tri Sandya (Narayana mantra), and the third, and also the last one being, the chanting of the Gayatri Mantram. After the ritual, the Princess of Java, Kanjeng Mahendrani, officially became a Hindu on July 17, 2017.

The Princess has also vowed that she will build a pasraman (ashram) in Bali which will boast of a blend of Javanese, Bali, and Nusantara culture.

After undergoing the Sudhi Wadani ritual, the Princess, who earlier had a serious demeanor, was seen smiling ear to ear.

People close to her said that the Princess was delighted to see the Balinese people who had come to witness the ritual of her embracing Hinduism and was touched by the warmth and their greetings.

Talking later, the Princess of Java had said that she felt grateful as her brother also supported her move of adopting Hinduism. In Pura Luhur Catur Kanda Pat Sari, she said:

“I am very grateful… today is a good day…because my own heart… and my brother supported it (move of adopting Hinduism).”

Further, she said that her desire to “return to the Dharma path was exactly what she wanted to do for a long time.”

Kanjeng Mahendrani even said that even before officially becoming a Hindu she followed the prayers in the Puras (Temples).  She added later, that, only now it is official.

The Princess said that her desire to become a Hindu was the exercise of her free will as she always felt peaceful when praying in a Temple or whenever she participated in a Hindu procession or Kejawen.

According to Princess of Java, Kanjeng Mahendrani, her entire family supported her decision to return to the path of Dharma as a Hindu.

Why was the initiation done at the Pura Luhur Catur Kanda Pat Sari?

This is an interesting point and was a major point of discussion.

Pura Luhur Catur Kanda Pat Sari was chosen because it is a Temple dedicated to the Dewata Nawa Sanga who is associated with the strong tradition of Sedulur Papat in Java which is still practiced by the Java and the Kejawen Hindus.

Kanjeng Mahendrani also strongly believes in the tradition of Sedulur Papat and hence, coming to Hinduism seemed natural to her.

The Princess was born in Rome, Italy in 1961 and is one of the major personalities of Indonesia.

The religious inclination of the Princess of Java prior to her initiation into Hinduism remains a mystery.

By Parwati Agung and Namta Gupta