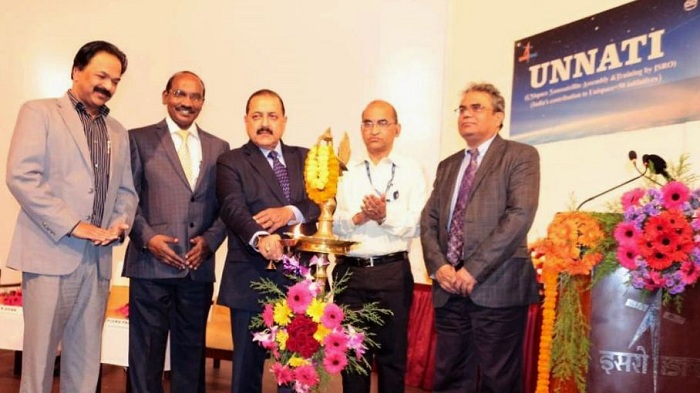 Space Technology has been provided with more budgetary allocations during the last five years and now it is utilised in Infrastructure Developments like roads, Railway lines and most importantly in disaster management, said Union Minister of State for Atomic Energy and Space Development of North Eastern Region, Prime Minister’s Office, Personnel, Public Grievances & Pensions, Dr. Jitendra Singh. He was addressing the gathering after inaugurating the UNNATI- (Unispace Nanosatellite Assembly & Training) programme organized by ISRO in Bengaluru today.

The Minister said that application of Science & Technology has become more in our day-today activities. Space Technology in India has entered every household. Space security is the in-thing and it will be on top priority in future, he added. The Minister appreciated the efforts of ISRO in launching various satellites and its space programmes, particularly Chandrayan Mission.

UNNATI, a capacity building programme on Nanosatellite development, is an initiative by ISRO to commemorate the 50th anniversary of the first United Nations conference on the exploration and peaceful uses of outer space (UNISPACE-50). The programme provides opportunities to the participating developing countries to strengthen in assembling, integrating and testing of Nanosatellite. UNNATI programme is planned to be conducted for 3 years by U.R. Rao Satellite Centre of ISRO in 3 batches and will target to benefit officials of 45 countries. The first batch started today in which 30 delegates from 17 countries are participating.