California-based digital currency wallet Coinbase has added support for Ethereum to enable users to easily buy, sell, send and receive Ether in their wallets. Ethereum is a decentralized platform for applications, similar to the bitcoin blockchain. Ether is a cryptocurrency, similar to bitcoin.

Users interested in trading or exchanging Ether can do so by visiting Coinbase.com or by launching the Coinbase app on their iOS and Android operating systems. 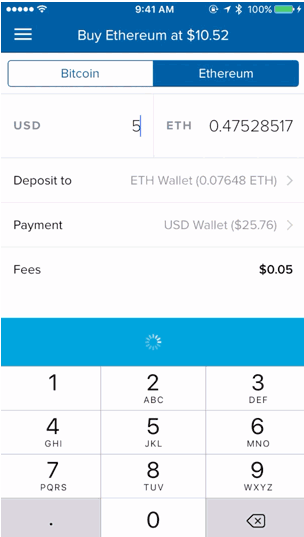 Ethereum has been grabbing a lot of headlines lately, even though it is still in its early stages. Many are expecting it to serve a purpose different and better than bitcoin. The Sunnyvale company believes that Ethereum is pushing the digital currency ecosystem forward and being the world’s most renowned digital currency platform, it is wholeheartedly supporting the decentralized platform to create an open financial system for the world.

Coinbase exchange, which renamed to GDAX in May this year, had enabled Ethereum trading on its platform.

That Coinbase is seriously interested in Ethereum, apart from the much-loved bitcoin, can be gauged from its official website where Ethereum is mentioned as much as bitcoin.

Coinbase’ Buy Widget has also added ETH purchases in addition to BTC. You can read about the simple steps to purchase Ether here.

Founded in 2012, Coinbase now has roughly 4.1 million users from 32 countries. It has rolled out 6.6 million wallets and supports 8,000 developer apps. World’s leading investors including Andreessen Horowitz, Ribbit Capital, Adam Draper, IDG Ventures, and several others have contributed more than $106 million in funding to the company.

The company is also said to have been involved in bringing down popular online torrent website KickAssTorrents (KAT). However, like always, the site has come online within few hours of being taken down, thanks to hosting on multiple cloud servers to prevent any blockade.