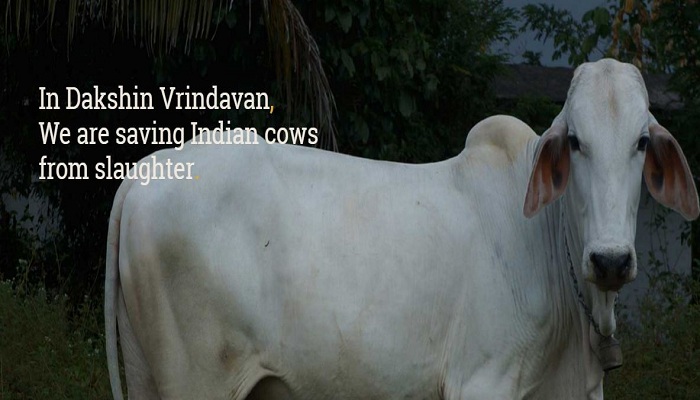 Ashwin Sampatkuamran from the Dakshin Vrindavan cow sanctuary narrates the ordeal when the goons came knocking at their doors threatening them to remove the cows from the land or else they would kill them along with those who were taking care of them. Currentriggers.com reached out to Ashwin Sampatkumaran to know what transpired and how Dakshin Vrindavan cow sanctuary is faring now. The excerpts have been produced below:

Is Dakshin Vrindavan under any kind of threat? Reports on social media suggested that you are being threatened. Can you reveal the name of the person or the organization threatening you?

The locals who I suspect are from CPI(M) came at 7 am on Sunday 16th October 2016. They were about 60 of them and were drunk, and they threatened us to remove the cows from our land (it is our personal land registered in our name).

When we refused, they threatened to kill the cows and us as well. They had a few sticks and other such things with them. We were scared and I called up SI Bhaseer of Chitoor police, he came up and told that it was up to the land owners what they can do in their land. And those objecting have to go to court if there is any dispute. They agreed, but they came up again and warned us against going to the court and that they wouldn’t mind killing the cows and conduct beef festival. We were scared and we removed the cows from our lush 10 acres’ land to a rented place elsewhere. The argument of these people (locals) is that we are using the paddy land for the cows.

How is the situation now? Did you receive help from anyone?

We have sent complaints to CM OF Kerala and to the PMO.

Have you filed FIR in the threats that you received?

They threatened to kill the cows if we approach the police with FIR. We had to postpone the idea of complaint since the prime concern is the security of cows.

Why do you think that you are receiving these threats?

They think we cow lovers are BJP affiliated and RSS affiliated, but we are not. We are not with any political or cultural outfits. We are purely interested in the Gauseva.

Can you elaborate what you do to protect cows at Dakshin Vrindavan?

We save cows from slaughterhouses and also those otherwise abandoned by farmers and provide them with lifelong medical care and protection with nutritious food.

What problems do you face in protecting cows? And is the society receptive to your work?

We are identified as a threat by the Communists and other so-called secular outfits. Others are highly supportive and it is only because of this support that we continue with our seva.

Cow slaughter is not banned in Kerala. Does that not make your work difficult?

Not from the legal point of view. But culturally it does. When we have beef fests going on every day, where do you think people would have respect for cows? I feel that once cow slaughter is banned in Kerala, Gauseva will be better appreciated.

Then, how are cows seen in Kerala and is there significant interest in her protection?

Cows mean beef to 90 percent of Kerala. Ours is the only Gaushala in Kerala aiming to protect cows from slaughter houses and that itself show you the interest people have in cow protection in this state.

And what as per your knowledge is the percentage of people who take to beef in Kerala?

I have no idea, but I can tell you that this is the only state apart from Bengal where Hindus eat beef.

Dakshin Vrindavan Gaushala is situated in Palakkad, Kerala and is the first Gaushala in Kerala that houses cows saved from the slaughter houses.