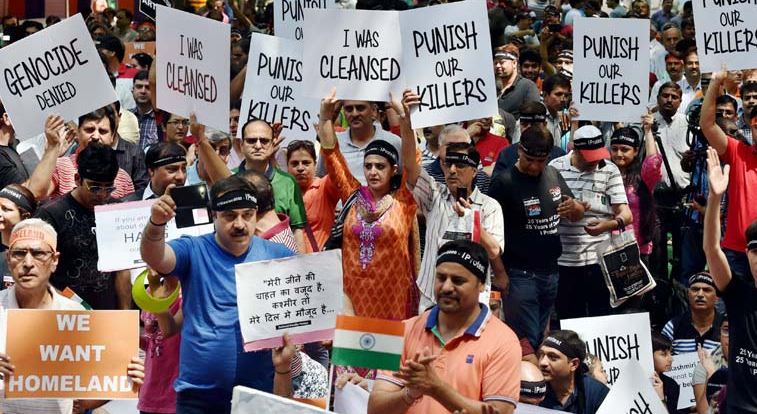 Kashmir is still burning and yet a major step has been taken that may lead to problems for the minority Hindu families in Dayalgham, Anantnag.  Vinod Pandit, the head of APMCC (All Parties Migrants Coordination Committee)  has said that in Dayalgham the police picket has been removed leaving the minority community vulnerable. The picket has been around since 1986 and hence its removal has raised eyebrows.

Lukbhavan in Dooru, Anantnag is a major Hindu Temple and the APMCC leader feels that this picket removal could create problems for the minority Hindus residing in the area.

Lukbhavan, Dooru, Anantnag, is a very prominent Hindu Temple of Kashmir. Security cover provided removed. The picket was there since 1986

Kashmir should not see a rerun of Nutnusa, Kupwara

Although he did not say it but yet one should not forget that the minorities have been at a receiving end for long. Even before the elimination of Burhan Wani, Kashmir was burning due to NIT Srinagar protests that made international headlines for the rape threat that the locals gave to the girl students.

After Burhan Wani’s elimination, Kashmir has seen several bloody protests leaving Hindus, Sikhs and other minority communities vulnerable. SGPC was even forced to ask Home Minister Rajnath Singh to step in to ensure the safety of the Sikhs as they were being forced by the separatists to chant anti-India slogans and take part in anti-India rallies.

The way media portrays Kashmiris, it seems only Sunni Muslims are Kashmiris while Pandits, Sikhs, Shias and others have descended from Mars

But the worst happened in the Nutnusa, Kupwara where a 1500-1600 strong local mob attacked the migrant camp where hapless Kashmiri Pandit community still lives. The mob did damage to the structures and tried to assault the people living there so as to force them to flee Kashmir.

Meanwhile, Zakir Rashid Bhat, a close aide of terrorist Burhan Wani, has posted a video message asking Kashmiri Pandits to return and hilariously claiming that those who did not leave Kashmir faced no problem at all!

In the video he said:

Our Kashmiri Pandit brothers should return to their homes. We take responsibility of their safety. They should look at those Pandits who never left Kashmir and have not faced any problems here at all.