While a majority of other regions are struggling to maintain their PC sales, Philippines is defying the trend to continue its outperformance, reports IDC.

The PC shipments hit a record high in Q1 2016, reaching 518,645 units at a growth rate of 7% YoY. The infographic below clearly suggests that consumers are driving the PC market growth. For Q1 2016, the consumer uptake of notebook PCs was recorded at 65%, compared to 35% for the commercial buyers. Entry-level notebooks were the biggest volume drivers in the consumer segment. 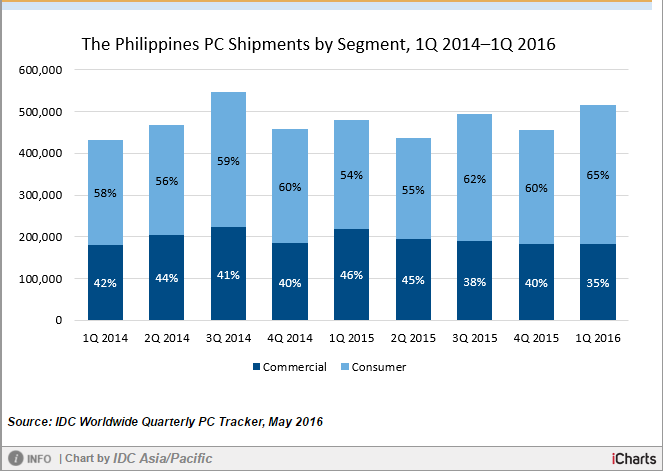 The commercial PC market was adversely impacted by the election season as government spending waned, and the enterprise sector decided to keep its cash close. But, these factors are likely to turn positive once the new administration comes into power.

A shift in consumer preferences was also noted. The graph below indicates that consumers are shunning the Desktop PCs for Notebooks, as they embrace a mobile lifestyle. As a result, Notebooks have recorded the third straight quarterly gains. Desktops have been on a consistent decline since Q4 2014.

The continued push of PC vendors in the entry-level notebook space, the proliferation of WiFi zones in public establishments, and the growing on-the-go culture of the working class are compelling consumers to consider portable PCs more than stationary ones.

Expectations are high that with the strong first quarter, the PC market will only strengthen for the rest of the year. Philippines, with its upward growth trajectory, will be the only Southeast Asian nation to see growth in 2016.

The rest of the world has a slightly different problem: slowing PC sales as consumers have switched to smartphones and tablets. With smartphones now loaded with almost all features that PCs earlier boasted of, the former is clearly becoming the preferred computing device.