One of the most explosive batsmen of this era sure knows how to shoot puns as well! Virender Sehwag is killing it on the social networking platform Twitter with his light-hearted puns, and his followers cannot seem to get enough.

Today is English bowler James Anderson’s birthday, and the Twitter-verse was expecting another humorous birthday tweet from the Indian batsman. Virender Sehwag gladly obliged, wishing the pacer in a manner in which only he could have wished.

He called the fast-bowler a modern-day great after telling that he is the second most popular Anderson after Pamela Anderson.

Sehwag also took the occasion to wish the very soulful, melodious Indian singer Sonu Nigam today. The way he tied Sonu’s song Ab Mujhe Raat Din to his 165 against South Africa at Eden Gardens in 2010 is impeccable, to say the least!

Happy Bday @sonunigam ,Enjoyed singing many of ur songs while batting,"Ab mujhe Raat Din"when I scored165 vs SouthAfrica at EdenGardens,2010

Believe it or not, but he can do it time and again, perfunctorily! See him wishing the Kiwi bowler Jacob Oram, or the legendary batsman Sir Gary Sobers, or the legendary Australian cricketer Allan Border. With each tweet, you cannot help but admire his knack for humor. 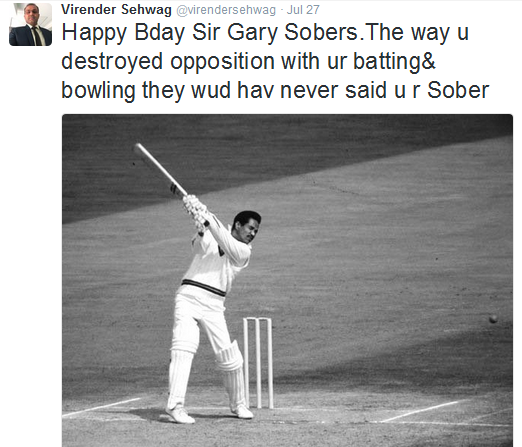 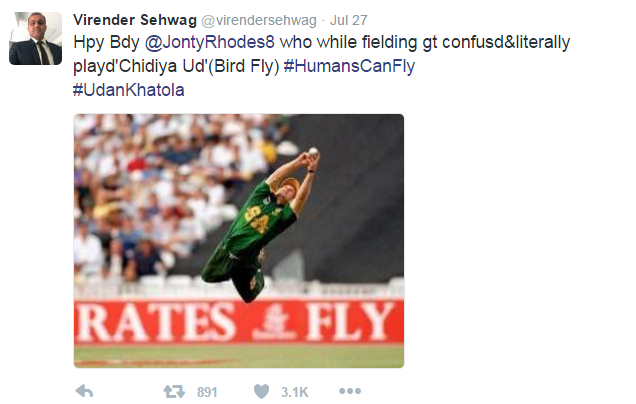 And it’s not just his birthday wishes that are driving the fans crazy, he also hits the nail on the head even in his daily tweets. Check out his appreciation for R. Ashwin’s performance in the first test against West Indies.

Virender Sehwag is definitely excelling off-field on Twitter. Timely and humorous puns delivered like the crisp blows during his batting days keep him close to the audience. You can follow him on Twitter via @VirenderSehwag.