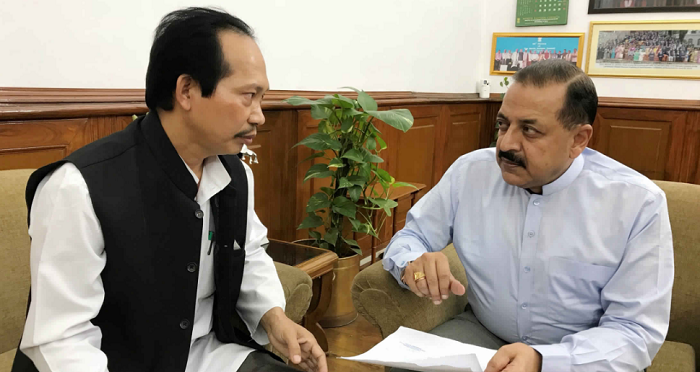 The agenda of the discussion included Border Area Development Programme (BADP) and Chakma Council’s demand that it should be involved in the planning and implementation of various schemes under BADP of the Ministry of Home Affairs. Chakma Autonomous Development Council is situated on the International Border with Bangladesh in the West and Myanmar in the South, which makes it strategically important area, calling for special attention.

Shanti Jiban also brought to the notice of Dr Jitendra Singh, their listed demand for setting up a Chakma House in the national capital of New Delhi. He requested that the Government of India may kindly allot a government building for use as Chakma House

Chakma Council Chief also handed over a memorandum to the DoNER Minister, which, among other things, called for amendment of the 6th Schedule of the Constitution, in order to provide more administrative power and financial support to the Council. Another issue related to a number of teachers recruited from time to time on fixed pay basis and a request was made for the revision of their salaries.

Shanti Jiban also handed over to Dr Jitendra Singh, relevant papers relating to the allocation of funds as the financial grant for the modernisation of Kamalanagar.

Dr Jitendra Singh told the team that since most of the issues were not being directly dealt by the Ministry of DoNER, he would try to take up the issues with the relevant Departments in the Ministry of Home Affairs, NITI Aayog and the Mizoram State Government.

Ministry of Home Affairs has not granted Citizenship to Chakmas: Kiren Rijiju