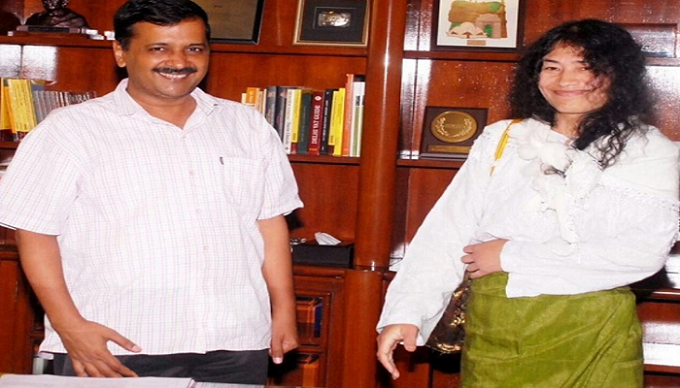 Today Delhi Chief Minister and AAP leader Arvind Kejriwal met the human rights activist Irom Sharmila and both of them seemed to be at ease.

Arvind Kejriwal spoke on the meeting later and said:

I salute her courage and struggle.

My best wishes and full support in her political endeavours.

For the last 16-years Irom Sharmila was on hunger strike but she broke her strike and took food last month. She has now decided to join politics to initiate a clean up and wants to get AFSPA removed.

But her meeting with Arvind Kejriwal holds much more significance!

Arvind Kejriwal and Irom Sharmila know each other well!

Let’s take you to the summer of 2011 when Delhi, the capital city of India, saw the rise of Anna Hazare. At that time, Anna Hazare had requested Irom Sharmila to join his movement against corruption. Arvind Kejriwal was the trusted lieutenant of Anna Hazare and at that time it was said that Anna made the move to bring Iron Sharmila at his behest.

Irom Sharmila had at that time expressed her surprise on the invite because she felt that her purpose was very different.

She also said: I am a simple woman and only want to reform society. I have no idea about social workers!

Irom also politely told that she could not join Anna because she was in judicial custody.

Now, more than 5 years later, we find Anna’s Kejriwal bloom into a full-fledged politician but he has not forgotten Irom Sharmila.

With AAP set to debut in Goa and Punjab and looking for newer pastures to unleash its socialist streak, who knows may be Manipur could be the next obvious field for it?

Irom Sharmila must be welcomed and encouraged to join politics