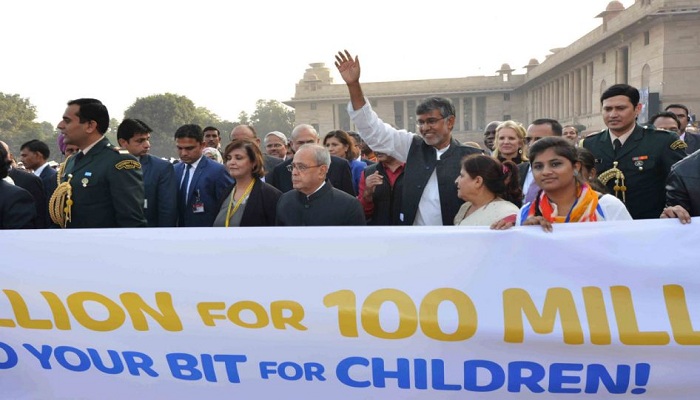 The President of India, Pranab Mukherjee marked his 81st birthday by launching a ‘100 Million for 100 Million’ Campaign organized by the Kailash Satyarthi Children’s Foundation at Rashtrapati Bhavan today (December 11, 2016).

Speaking on the occasion, the President said that he was delighted to launch the campaign led by Nobel peace prize winner, Kailash Satyarthi, from Rashtrapati Bhavan, an institution which symbolises our Republic’s commitment to democracy, pluralism and secularism.

The President said that despite the progress the world has made in science and technology, economic development and in other fields of human endeavour, there are still over a 100 million children who are “out of school”. They are being denied their childhood and are facing exploitation in various ways. The world must realise without further delay that there can be no progress unless our children are safe, secure and unless they are provided the freedom and opportunity to become agents of change for the larger good of humanity. To ensure for them a bright, carefree and secure future, devoid of poverty, violence and want is our bounden duty.

The President said this global effort to mobilize 100 million youth for shaping a better future of 100 million children who are less privileged is the beginning of a change which was long overdue. It is only appropriate that this campaign begins from India, which has one of the largest populations of youth in the world. He expressed hope that the campaign, as it runs for five years, will have a path-breaking impact on the lives of children across the globe. He urged all children and young people from India and abroad to join this campaign and be the torchbearers for a vibrant, compassionate and happy world where every child is free from want, fear and exploitation.

The ‘100 Million for 100 Million’ Campaign aims to mobilise 100 million youth and children for 100 million underprivileged children across the world, to end child labour, child slavery, violence against children and promote the right of every child to be safe, free, and educated, over the next 5 years.