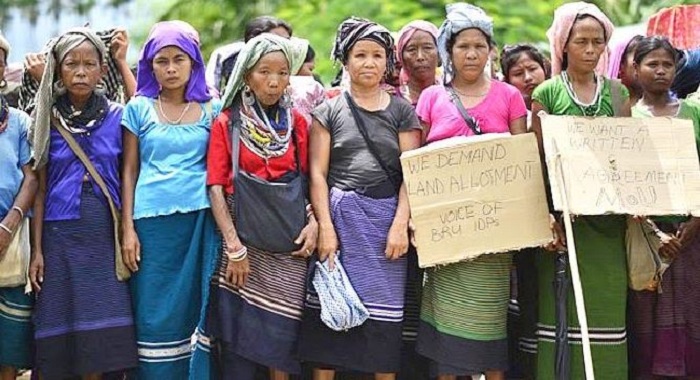 In a major breakthrough on repatriation of displaced Bru persons from Mizoram since 1997, an agreement has been signed by Government of India, Governments of Mizoram and Tripura and Mizoram Bru Displaced People’s Forum (MBDPF) here today in presence of Union Home Minister Rajnath Singh, Chief Minister of Mizoram Lalthanhawla, and Chief Minister of Tripura Biplab Kumar Deb.

i Rajnath Singh flanked by the Chief Minister of Tripura, Biplab Kumar Deb and the Chief Minister of Mizoram, Pu Lalthanhawla, after the signing of agreement between Government of India, Governments of Mizoram and Tripura and Mizoram Bru Displaced People’s Forum (MBDPF), in New Delhi on July 03, 2018. The Union Home Secretary, Rajiv Gauba, senior officers of MHA and representatives of MBDPF are also seen.

Government of India will provide financial assistance for rehabilitation of Bru people in Mizoram and address their issues of security, education, livelihood etc. in consultation with Governments of Mizoram and Tripura.

A Committee under Special Secretary (Internal Security) will coordinate the implementation of this agreement.

The Reang community or Bru people are followers of Indigenous faith and Hinduism and had to flee Mizoram in September 1997 following ethnic violence and since then, they are living like refugees in their own country in bad conditions at relief camps at Kanchanpur in neighboring Tripura.

In January 2017, a Tripura-based organisation ‘Bru Hindu Joint Coordination Committee’ wrote to the Union Home Ministry, telling it to “safeguard the Hindu religion or indigenous faith of the Bru community in Mizoram”.

The letterhad also stated that many people who had converted to Christianity had “returned back to their original religion.” Christianity as per 2001 census accounts for 9.98% of Bru people while traditional beliefs/animists/Hinduism mix comprises of the rest.