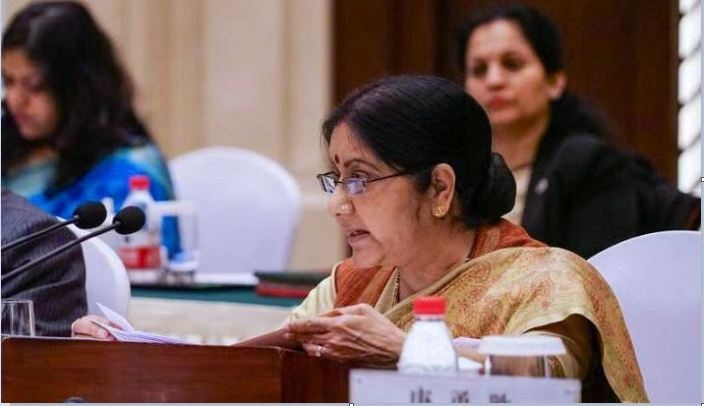 External Affairs Minister of India Sushma Swaraj at the 16th Meeting of the Foreign Ministers of Russia-India-China which is taking place in Wuzhen, China.

China had earlier called for calm between India and Pakistan but the Indian side is on a diplomatic offensive and is likely to use all opportunities to isolate the Jaish-e-Mohammad sympathizing neighbor. Talking about terrorism, she termed it as the top of the existential threats that the world faces today.

Talking at the forum Sushma accused Pakistan of being in an enforced denial over Jaish-e-Mohammad:

“You are aware of the recent heinous terrorist attack on our security forces in Pulwama, Jammu and Kashmir perpetrated by Jaish-e-Mohammed, a Pakistan-based and supported terrorist organization proscribed by the United Nations and other countries. We lost more than 40 personnel from our Central Reserve Police Force while several others are injured seriously.

Such dastardly terrorist attacks are a grim reminder for the need for all the countries to show zero tolerance to terrorism and take decisive action against it. Following the Pulwama terrorist attack, instead of taking seriously the calls by the international community to act against Jaish-e-Mohammad and other terror groups based in Pakistan, Pakistan denied any knowledge of the attack and outrightly dismissed claims by Jaish-e-Mohammed.”

Talking about the Indian concerns, Sushma then said that in the light of the continuing refusal of Pakistan to acknowledge and act against terror groups on its territory, and based on credible information that JeM was planning other attacks in various parts of India, Government of India decided to take ‘pre-emptive action’.

She also said that this was not a military operation. Her statement is in line with what the Indian side said yesterday right after the successful strike against Jaish-e-Mohammad.

India did not target any military installations, Sushma told the audience at the trilateral summit and also said that the limited objective of the pre-emptive strike was to act decisively against the terrorist infrastructure of JeM in order to pre-empt another terror attack in India.

India does not wish to see a further escalation of the situation and will continue to act with responsibility and restrain, Sushma said today.