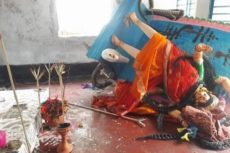 On January 13, a Hindu Temple dedicated to Goddess Mansa Devi was attacked. The 200-year old Temple is the pride of the community and lies in the house of Late Horipada Das’s house situated at Mahakal village of Abhaynagar sub-district of Jessore district, Bangladesh, was ransacked by a preparator named Yasin. The man tried to […]

As the situation turns worst for the Bangladesh Hindus, we at Currentriggers.com reached out to Hindu Forum Sweden President Ms Chitra Paul to know what solution does she foresee for the Hindu community of Bangladesh. Here are the excerpts from the interview: What is the current situation in Bangladesh Ms Chitra Paul? One word.  Horrible! Religious persecution […]