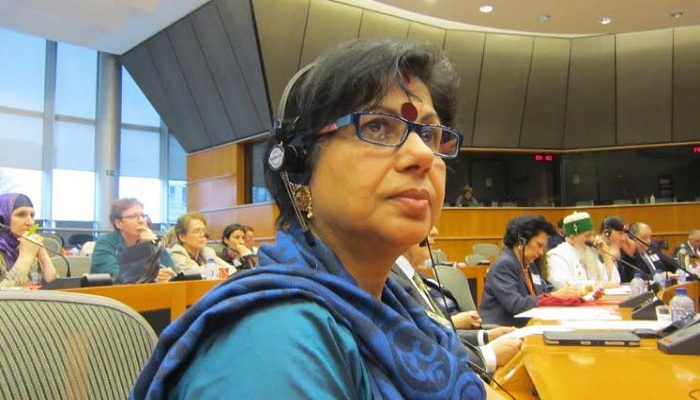 As the situation turns worst for the Bangladesh Hindus, we at Currentriggers.com reached out to Hindu Forum Sweden President Ms Chitra Paul to know what solution does she foresee for the Hindu community of Bangladesh.

Here are the excerpts from the interview:

What is the current situation in Bangladesh Ms Chitra Paul?

One word.  Horrible! Religious persecution and systematic oppression, against the Hindu minority community, is escalating every day. At the moment Hindus are seeking help from the UN.

Who is behind this violence because the attacks seemed coordinated?

I don’t know who is behind this violence because we did not get any investigative report till now… other than knowing that it was a preplanned attack. However, according to newspapers, TV and the interviews of victims give some indication that the ruling party Awami League’s internal power conflict played a vital role. Furthermore, there are many Awami rioters in power. Ministers and Awami league personnel who are found to be the masterminds behind the whole conspiracy should be sued for their dirty politics.

A Bangladesh minister abused Hindus and he is still in the government. How do you see this?

Yes. This not new. If you have followed Bangladesh news, then you will find similar abuses being used by another minister too. I am talking about Engineer Mosharraf Hossain and he even threated Advocate Rana Dasgupta. This minister is the relative of our PM Sheikh Hasina, so it is actually nothing but a kind of hate crime against the Hindus by the State. Hindus have no voice at all. If any Hindu tries to use their freedom of speech or do something, then they get stopped by different arms of the state, socially and politically.

Can Hindus survive in Bangladesh?

If you see the situation in Pakistan, you will get the answer. We have a good example in Pakistan. At this rate, it seems that Bangladesh is already following the same path.

How do you see Sheikh Hasina’s response so far considering that she is known as India friendly?

It is not a matter of Hasina. It is matter of policy. She is following Awami League policy. Till the time Awami League (AL) is in power, it will make everyone believe that they have friendly relations with India.

But does she understand or feel India’s sentiment? Sheikh Hasina succeeded in showing the world that Bangladesh has zero tolerance on terrorism. Why couldn’t she have a similar zero tolerance when the attacks happen on the Hindus and other minorities? She has failed because of her administration, ministers with Islamist mindset, and her grass root AL members who act as rioters whenever they feel like.

And what about Indian response to this situation? Do you think that India should abstain from commenting on the situation?

What can we expect from India? India never ever stood on the Hindus issue in any case. I am ashamed and angry at the West Bengal government and the central government as well. They have the power to send urgent food and shelter relief, but they did nothing. After one week Susama Swaraj tweeted on the Bangladesh situation, but is it enough? So far, only Nepal has shown its solidarity. But my question is where is the humanity?

A little outside the purview of the current situation. But in India, migrants from Bangladesh are not welcome. Hindus meanwhile feel unwelcome in Bangladesh. What is the way out of this? Can you suggest any solution?

We need to have a political dialogue with the two nations (India and Bangladesh) in the interest of the Bangladesh Hindu religious minorities.

We need a new agreement based on the Indira-Mujib agreement, which by the way hasn’t  even been properly adhered to and this has led to the events that led to this current turmoil. We need a new agreement and also if Bangladesh follows the Two Nation theory directly or indirectly then we have a right to ask as to what was the logic behind the liberation war of 1971?

Bangladesh is concerned about Indian Kashmir and Gaza but what about the Chittagong Hill tracts?  Bangladesh is our Homeland and we cannot just leave our motherland and take shelter in India but I feel India should give moral support in this matter.