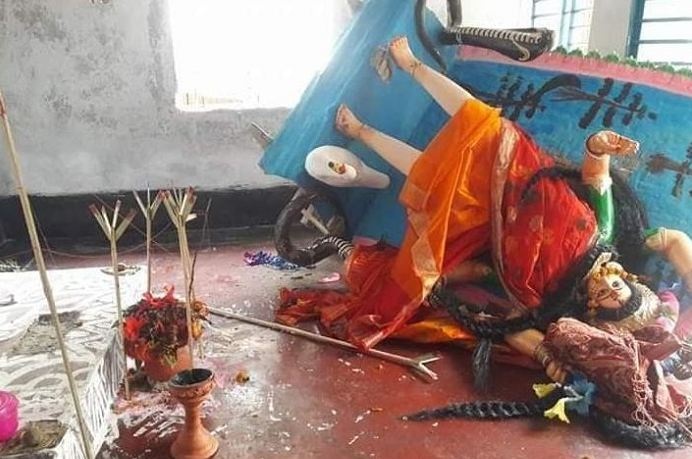 On January 13, a Hindu Temple dedicated to Goddess Mansa Devi was attacked.

The 200-year old Temple is the pride of the community and lies in the house of Late Horipada Das’s house situated at Mahakal village of Abhaynagar sub-district of Jessore district, Bangladesh, was ransacked by a preparator named Yasin.

The man tried to flee after the desecration but the angry Temple devotees caught on with him and he was first beaten up and then handed over to the police.

Yasin, 25, is being described as being ‘mad’ by the local police but there is no history of him attacking any other religious places, told a Hindu devotee to www.currentriggers.com when asked about his background.

A case was registered against Yasin and he is currently in jail.

Bangladesh Minister hurts Hindus with his rants against Ram Rajya

On contacted by www.currentriggers.com, Advocate Gobind Chandra, secretary general of the National Hindu Grand Alliance, the most influential Hindu body in Bangladesh, condemned the attack but he said that only condemnation won’t act as a deterrent for acts like these. He added that only exemplary punishment for criminals like Yasin can stop religious intolerance in Bangladesh. He demanded a quick trial against criminals like Yasin in the special tribunal to send a message to elements who wish to destroy religious harmony and spread fear in the minorities.