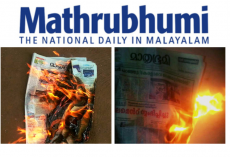 New York, March 10, 2016: Malayalam national daily Mathrubhumi has apologized to the Muslim community for hurting their sentiments. The daily has tendered the apology after the Muslim community expressed its anger over the reproduction of a comment that allegedly targeted Islam’s Prophet. The comment was posted on social media on the controversy that broke out […]