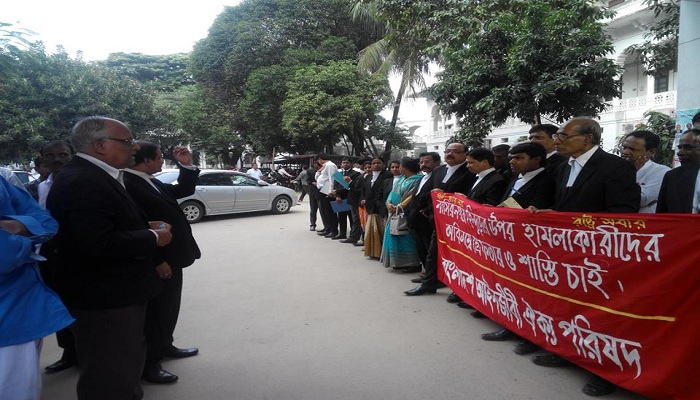 Bangladesh Ainjeebi Oikkya Parishad made a human chain in front of the Supreme Court Bar Association on 09.11.2016 demanding justice for the minority Hindu victims who were attacked by Islamists at Brahmanbaria and Hobigonj District of the nation.

In several parts of the nation, the minority groups are protesting against the violence that has attracted international criticism but so far at least in the country, the civil society has remained quite fearing heavy reprisals from the Islamists.

Many intellectuals fear that the Islamists have become mainstream as news has come to light that many attacks were undertaken by well educated Muslim men and women who hid their faces before unleashing attacks on the hapless Hindus after someone spread the rumor that a Hindu man has committed blasphemy by placing the picture fo Hindu God Lord Shiva on the Muslim holy place Kaba.

The Hindu man denied that this was posted by him but he apologized in any case under pressure as the violence engulfed almost all parts of the nation. At Currentriggers.com, we did extensive coverage of the violence from day one.

You can check these:

Situation of Hindus in Bangladesh is horrible: HFS President